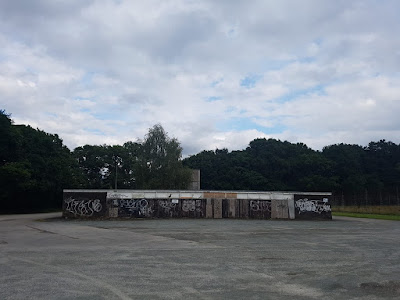 Sketch For Summer is the opening song on 1980's The Return Of the Durutti Column album, a three minute introduction to the work of Vini Reilly, a song combining simplicity and beautiful, languid guitar playing.

In 1980 Durutti Column suddenly became a solo project when the rest of the band dissolved overnight, about to record an album. They had appeared from the remnants of a local punk band called Fast Breeder and contributed two songs to Factory's first release, A Factory Sample. When Tony Wilson and Alan Erasmus arranged for their debut album to be produced by Martin Hannett, three members walked out leaving guitarist Vini on his own. Not believing that a one man group would be allowed to record nevermind  release an album Vini had to be coaxed by Hannett into getting out of bed but over a few days Vini played guitar and Hannett played echo unit, delay and drum machine. Vini told Hannett that he didn't want the 'distorted, horrible guitar sound' and Martin went on to get sounds out of Vini that no one else was doing. Hannett then pulled three days worth of guitar playing into shape and a nine track lp was created that Vini didn't beleive would appear even when Wilson gave him a white label copy of it.

This being Factory in 1980 and Wilson being Vini's manager the entire early Durutti Column is covered in Situationist jokes and references. The group's name was a reference to an anarchist unit that fought in the Spanish Civil War. The album's title, The Return Of The Durutti Column, was taken from a 1967 Situationist poster. The initial run of the album came in a sleeve covered in sandpaper, another Situationist joke, borrowed from Guy Debord, an album that would over time destroy the rest of your record collection. All of this is very Factory, very knowing and part of the legend but listening to Sketch For Summer is the whole deal in itself, a song that fades in with Hannett's birdsong, created on one of his delay boxes, and then a drum machine smothered in echo and tape hiss before Vini's guitar playing arrives. Melodies played through some chorus and echo FX pedals, and little runs of notes, lyrical without words, the repeated refrain around two minutes thirty and then the run out with the drum machine and the birds is just perfect.
Posted by Swiss Adam at 08:00

Always liked this track, but forgot about it for some years until it turned up on an early nineties Factory comp, possibly the Palatine box set, which covers the big hitters and and the less obvious, essential when compiling Factory stuff. Nice to hear it again.

Palatine is a great box set, the 2nd and 3rd discs especially. Really well done compiled and put together.

Vini's not a well man these days it would seem. Very sad to hear.

Yep, been unwell for some time. Although recent reports suggest he's picking up.

Ah I think Sketch For Summer always sounds good but especially at this time of year! Full of memories for me too but not ones I can print!
The sandpaper sleeve was a bastard though, wasn't it!

Sounds like a story that should be told C.