Well I Was Walking Down The High Road 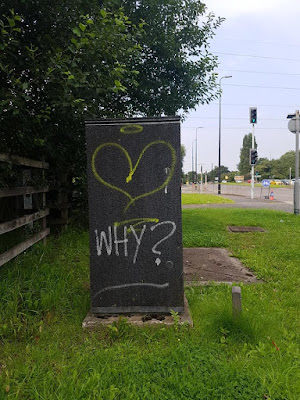 It would have been Joe Strummer's 68th birthday yesterday had he lived. The world has been a poorer place for his absence. He would have had plenty to say about the events and issues of recent years- The Clash were a band who looked outwards and embraced the world in all it's colours and varieties, his songbook is full of songs sympathetic to the plight of immigrants from Something About England to At The  Border, Guy and he would have had no time I believe for rabble rousing populists intent on breaking bonds between people and creating distrust and division. In 1999 during a magazine interview he said 'In fact, punk rock means exemplary manners to your fellow human being. Fuck being an asshole...'.

On Global A Go Go, his second album with The Mescaleros, he sounds like a man reborn, there's a joy to the songs, the band are attuned to Joe's worldview and way of working and he writes some of the best songs of his solo career. On Bhindi Bhagee he takes a chance encounter in the street and the wide selection of takeaway food available on Willesden High Road and turns it into an affecting, giddy, life affirming song, this multinational, global food range causing him to throw his arms open and welcome an Australian tourist to 'the humble neighbourhoods'. The stranger in the street asks him what his music is like...


'So anyway, I told him I was in a band
He said, "Oh yeah, oh yeah, what's your music like?"
I said, "It's um, um, well, it's kinda like
You know, it's got a bit of, um, you know"
Ragga, bhangra, two step tanga
Mini-cab radio, music on the go
Um, surfbeat, backbeat, frontbeat, backseat
There's a bunch of players and they're really letting go
We got, Brit pop, hip-hop, rockabilly, lindy hop
Gaelic heavy metal fans, fighting in the road
Ah, Sunday boozers, for chewing gum users
They got a crazy DJ and she's really letting go'
His outlook and politics in a song. Happy birthday Joe.
Bhindi Bhagee

We're off to Anglesey for a couple of days, a chance to unplug and recharge in Ynys Mon. See you next week.
Posted by Swiss Adam at 08:00

What a great song, always liked the feel of this. There are some real jewels in Joe's solo stuff.
Aah, I'm envious of Anglesey, beautiful place. Enjoy.

Totally with your assessment of 'Global A Go Go', what a marvellous record it is. Have a good break SA.

have a good break