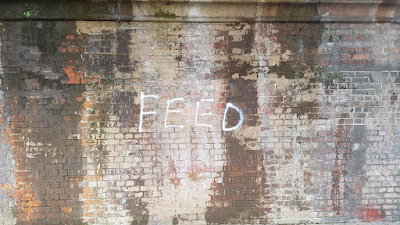 Back in 2018 Iggy Pop met Underworld in a hotel room. Rick Smith and Karl Hyde had got all their kit set up and some tracks worked up and ready to go and decided to see if Iggy fancied recording some vocals. The four track EP that followed, Teatime Dub Encounters, came out a bit like that sounds, fully realised backing tracks and Iggy improvising. On the lead song, Bells & Circles, Iggy went into a extended spoken word reverie about boarding a flight sometime in the 1970s, taking a gramme of coke, chatting up the stewardess but losing her number, being able to smoke on airplanes and the death of liberal democracy. A polished Underworld throbbed away behind him, Born Slippy reborn, Karl coming in on backing vocals. On Trapped Iggy has a pop at Johnny who has a mortgage. On I'll See Big he looks back at his inability to make friends, his falling into and out of bands, and making friends with other people who had few friends. The music on I'll See Big is low key and subtle. Iggy being reflective is a product of aging and surviving.

Two years earlier Iggy released what looked like his last testament, the Josh Homme produced Post- Pop Depression. Like all Iggy Pop albums since The Idiot and Lust For Life it's got at least one real stinker but it's also got several late period Iggy gems and that aging thing again, Iggy being reflective, looking back at a life lived and the seeing what's left. Gardenia is a genuine Iggy classic, Homme and the band finding a really good groove, none of the expected heavy rock but a really well crafted and sympathetically played song with Iggy recounting the days of his youth and an evening in a club with Allen Ginsberg. Equally good was Break Into Your Heart, an overloaded, smoky blues with Iggy examining his past tendency to woo women but then back out when he's asked for more.

Break Into Your Heart