I Want A Place To Stay 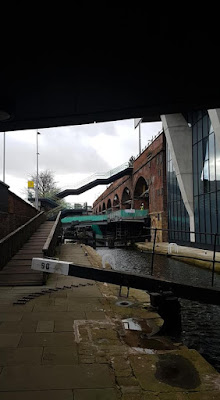 Back to 1989 and 1990 today and the sound of young Belgium. People get a bit sneery about the rave- pop/ dance pop singles that sold in enormous quantities from 1990 onwards but the truth is many of the same songs were club hits first, danced to through the night. In lots of ways these early 90s rave hits are the equivalent of the classic 60s pop singles and the 1970s- The Monkees say or T-Rex. Massive chart topping songs, cutting edge production coupled with song writing skills for that time and place, designed to hit you quickly, make you shimmy and then move on to the next one.

Technotronic came from Belgium, the project of Jo Bagaert who had come up through the New Beat scene. Hooking up with rapper Ya Kid K they found a formula of stunningly effective, catchy, dance music that took on a much more visual element when they got Congolese model Felly Kilingi to front it. Pump Up The Jam, released in November 1989, was a massive single, selling in vast quantities in the UK and the USA, a club- radio crossover built on a thumping and Ya Kid K's rap. Crisp, to the point, in your face, confusing to middle aged people, ridiculously infectious. The video is a perfect slice of 1989 too, rave psychedelic graphics, cycling shorts, acid print, dayglo hooded tops and manic dance moves.

Felly it later turned out was just miming. Did it matter? It did not.

Pump Up The Jam (Edit)

Technotronic became a hit machine, single after single. In 1990 they released Rockin' Over The Beat, a song about dancing with a lovely piano riff that to me has the slightest tinge of melancholy in it, the comedown just evident in the grooves. The drums thump, the synths blare, Ya Kid K's rap is great (her delivery of the word 'mel-o-dee' is a joy). It was remixed by Bernard Sumner, New Order's frontman putting those hours spent in the Hacienda to good use.

Wow. I somehow wasn't aware of the Technotronic/New Order crossover, but it sounds exactly as you'd expect.

I'm afraid that I was amongst those who so earnestly got all snooty about acts like Technotronic at the time, but you're dead right, Pump Up the Jam is a classic pop single. I really enjoyed hearing it again.

So true what you say re. the comparison with '60s hits - it's just how it always is in music regardless of the era but think we tend to conveniently forget that!
I confess I just wasn't very open to acts like Techtronic at the time at all- but totally get it now. It sounds better than ever.

Believe it or not, I actually saw Technotronic. They opened for Madonna in 1990, and my girlfriend dragged me to the show. I married her anyway. All I remember of Technotronic is a lot of synchronized dancing and a table of turntables. Not my element. I swore off arena-type shows after that. Only two exceptions have been made in 30 years... Bowie and a double bill of Paul Simon/Brian Wilson. They were made because I was able to get incredible seats.

In the true Belgian style they also 'borrowed' the basic backbone of course from 'The Acid Life' by Farley Jackmaster Funk ('88). And made it so much better!

Drew- I think we can. Belgium comfortably beating their Benelux neighbours at this time.

Brian- great story. I suspect Technotronic weren't best served by appearing as Madge's support act in an arena. Synchronised dancing and turntables sounds like it might be lost on the big stage.

SA - you make a great point about some of these Pop/Rave tracks having roots in the clubs before they made bags of money for the record labels...I remember being at Zanzibar, Tony Humphrey's residence in Newark, NJ one night in 1991, and about 2am, the Master threw down Strike It Up by Black Box and later Nomad's Devoition. The crowd didn't suddenly walk of the dance floor in protest - quite to the contrary, they increased their euphoric intensity. We'd love to think that real clubbers only want to hear tracks by Blaze or Frankie Bones, Masters At Work or Ananda Project, but the reality has always been that a great beat and a wicked hook will always keep the dancers on their feet.

Love it. Proper banger. Still have the 12” I bought back then