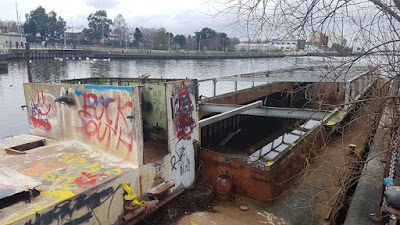 In the early 90s Underworld's remixes were as essential as their own material, the group producing a slew of long, tribal, dub techno remixes that were monumental trips in their own right. Between 1992 and 1995 their remixes of Bjork, William Orbit, The Drum Club, One Dove, Orbital, Saint Etienne, Leftfield, Front 242 and Shakespeare's Sister are all superb work and as was standard at the time, they often produced two or three mixes, making what amounted to mini- albums and great value for money on 12" or CD single. In 1993 they remixed Spooky, one of the era's omnipresent progressive house outfits (and still at it today), turning in a nine minute thumper with dancing topline piano melodies, a pair of disembodied voices (one a female 'ooh' and 'yeah' and the other sounding like a foreign radio station or platform announcement), bleeps, a huge bassline and a crashing rhythm- what more do you want? Or need?


Wow, that brings back (hazy) memories!!

Gargantuan by Spooky is a great album. I
didn't realise they are still active, which is a poor do on my part.

Loving the Underworld retrospective this week Adam. Bringing back lots of great memories

Really enjoying the love for Underworld these past few days. Underworld & Spooky? Win win. As you say, Underworld remixes were deserving of albums in their own right and I never tire of listening to them. Their remix of The Drum Club's 'Sound System' has been on my playlist this week. Sad to read last night that Claudio Coccoluto has passed away. He also created an equally epic remix of the same song back in the day.

Nice remix indeed.
I have a few of the remixes you mentioned.
"the other sounding like a foreign radio station or platform announcement" --> I believe the announcement to be Russian + the same sample was previously used in Snap! The Power, as can be heard here https://www.youtube.com/watch?v=j1BNcSBApOU
I really got into Underworld through Richard, a colleague friend of mine; he was really into U; Richard got killed in the 90s, on a Friday night out, run over on the kerb by a psycho who had not taken his pills; Richard was in his early twenties...
I regularly remember Rich when I listen to Underworld ...

Reading your comment stopped me in my tracks Ben. How sad. And how profound music can be in triggering memories.