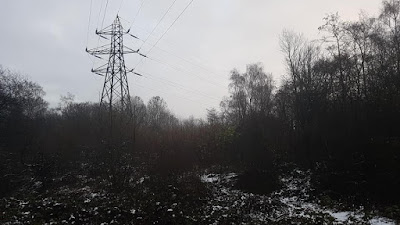 A new release from a new pairing called ¡La Ruta! came out last month, a four track 12" single. ¡La Ruta! are Sean Johnston, (Hardway Bros and Andrew Weatherall's partner in the travelling cosmic disco A Love from Outer Space) and Martyn Walsh, former bass player in Inspiral Carpets. Back in the day Sean one of Sean's previous lives was a booking agent for the Oldham band and did their tour merchandising and t- shirts. A recent reconnection between Sean and Martyn led to ¡La Ruta!

Kibbo Kift is eight minutes of upbeat, science fiction chug, with a bouncing, driving bassline, named after a 1930s English woodcraft movement aimed at bringing about world peace through handiwork, hiking, camping and other character building activities for young people. The words Kibbo Kift come from an old dialect, apparently translating as 'proof of great strength'. It was against mass movements based on race or nationality hoping to bring about a better world via mental discipline.

EP closer, Those Who Know, Know, rides along on waves of synths, arpeggios and a choral section and again a standout bass part, a tune constantly looking upwards, feeling like it's striving for something better- and couldn't we all with a bit of that.

In his book 'Electric Eden' Rob Young refers to links between the Kibbo Kift, the edwardian folk revival, Morris dancing, neo-paganism, the Scout movement and the german Wandervogel movement of the 1930's. Perhaps today remnants of the Kibbo Kift can be seen in those sporting edwardian beards together with Hitler youth haircuts? Beware the Kibbo Kift!
-SRC

I read Electric Eden a year or two ago and remember the Kibbo Kift links Rob Young made you've mentioned. There were some curious groups around in the 1930s.

It's an interesting book. It nearly (but not quite) tempted me to buy an Incredible String Band album. Yes many curious movements in the 30's, often full of utopian idealism but with that undercurrent of crankiness and at worse despotism.
-SRC

I was almost tempted by the Incredible String Band too but thankfully by the time I went back to the next chapter the moment had passed.