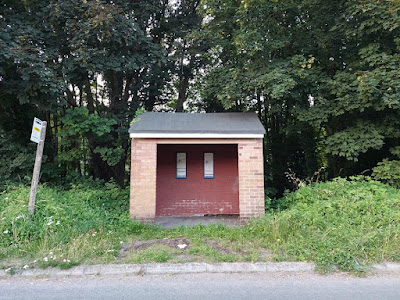 I woke up yesterday morning with the line from The KLF's Last Train To Trancentral running through my head, 'All aboard, all aboard, woah- oh'. In 1991 they performed it on Top Of The Pops, a peak KLF 'live' performance in many ways.

This remixed version from the Last Train To Trancentral Remix 12" is a beauty, the halfway point between the Chill Out album and The KLF's magnificent run of stadium house singles, six minutes of train sounds (horns sounding, level crossing bells ringing, engines and rolling stock rumbling over the tracks) and some of the samples that make up the proper version. Ambient stadium house.

Still gotta loveKLF. So powerful and so influential. And still so danceable.

Love the song and the bus shelter.

Absolutely brilliant. I've been listening a fair bit to Come Down Dawn since it came out. It features this version (I think) as the backdrop to Atlanta To Mobile (aka Trancentral Lost in My Mind on the original Chill Out album). Still out there in a league of their own, 30+ years on.