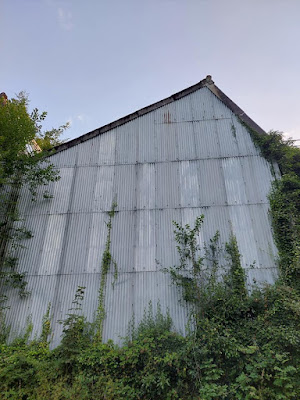 Mogwai's album As The Love Continues has been nominated for the Mercury Prize. I'm not sure I'd even clocked that the Mercury Prize was still going and apart from the publicity the nominees and winner get it's always seemed a very arbitrary thing, announcing one album a year as 'the winner' from a field that tries to include everything from avant- rock to folk to modern jazz to 21st century smart pop. But the announcement did encourage me to go back to the Mogwai album, one I played a lot when it came out back in February but not much since. If anything it sounded better, stronger, than it did first time around and for a band that have been around and releasing records since 1997 it's encouraging that their latest release stands alongside their earlier work.

In some ways As The Love Continues doesn't break any new ground but it does bring together what they do very well, on the back of two previous albums that did the same (the soundtrack to Kin and 2017's Every Country's Sun were both first rate albums). Mainly instrumental, monumental, slowly building songs, with freak out climaxes and sections of beauty, the odd sung song (and I love the Mogwai songs with Stuart Braithwaite singing), the synths and vocoders becoming as integral as the guitars, and obtuse, laugh out loud song titles. This song, although admittedly not blessed with a funny title, is as good as any.

By pure chance I caught a rundown of the Mercury nominees last week. It only confirmed what I already knew - I'm woefully out of touch with current goings on. There's some interesting stuff in amongst it all that I must try to get back to.

Mogwai sounding as good as ever.

Just looked. You’re not the only one, Swede.

I was bemused by seeing Mogwai make the short list actually. I feel like a late 90s/early 00s band is required as an "old guard" nominee every year now. It was Foals in 2019, Everything Everything in 2018, I forgot about the award last year to be honest. I enjoy The Love Continues, but it's not one of their stand out albums.
The only nominee I was very satisfied to see was Hanna Peel and her beguiling Fir Wave. But to leave Róisín Murphy and Sleaford Mods off the list seemed a bit shortsighted.