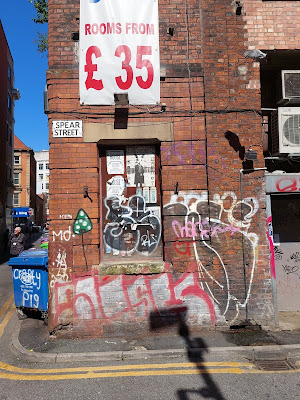 At the tail end of 1985 a band calling themselves The Clash released their sixth and final album, Cut The Crap. This version of the band, Clash Mk. II to some, was a post- Topper, post- Mick Jones version- Mick snarked that it took two guitarists to replace him following his unceremonious sacking by Joe and Paul. The two guitarists were Vince White and Nick Sheppard (Vince was actually Greg but re- christened by Paul Simonon who said Greg wasn't a rock 'n' roll enough name and threatened to quit). Drummer Pete Howard was the third unknown (replacing Terry Chimes who'd stepped in to replace Topper when they toured the States supporting Combat Rock and had chart hits, exposure and stadium gigs with The Who). The new version of The Clash had toured the west coast of the USA and were well received. Members of California punk bands have said the five man Clash were as good live as the original line up- but we can possibly take that with a small pinch of salt. If Paul had quit the group would have been over and maybe that would have been a neater ending, leaving Joe to lick his wounds and pour the songs he was writing into a solo album which is what Cut The Crap should have been. Defensive and angry Joe insisted the Clash Mk. II were going back to punk rock basics, cutting out the reggae and experimentation of Sandinista! and Combat Rock. Joe insisted anyone could write punk songs- despite the fact that almost all the music previously had been written by Mick. Joe, proving  a point to Mick who had frozen the band's assets legally,  wrote a song called We Are The Clash.

In early 1985 the new Clah went into the recoding studio with abut twenty songs written, ready to record. Bernie Rhodes was back in the manager's chair and had been instrumental in Mick Jones' sacking for 'rock star posturing'. With little money to play with Bernie booked a studio in West Germany and an engineer (Michael Fayne) with affordability in mind and also because he had experience using drum machines. Either Joe or Bernie (or both) had decided they'd employ drum machines in response to and compete with Mick's experimental drum machines and sampling in the early stages of Big Audio Dynamite. Strummer's new songs and the demos of them (This Is England, Three Card Trick, Sex Mad Roar) were promising and Joe wanted them recorded quickly and with the new group, guitars to the fore. Rhodes became convinced he was no the band's producer and was on the cusp of a new genre combining cut ups and samples, drum machines, electro and Joe's voice on top. Paul rapidly lost interest. Bernie bullied drummer Pete Howard in the studio. Bernie wanted football crowds and massed chants on backing vocals, a nod to the busking tour the five men did the year before. Joe and Bernie clashed and apart from This Is England, which everyone agreed was a keeper, and the only song in the studio that all five members really contributed to. Bernie took over and Joe let him. Bernie filled all twenty four tracks on each song, cluttering the album and muddying the sound, the two guitarists contributing twin Les Paul guitar parts, drum machines clattering away and chanting choruses competing with samples and dialogue from the TV. Paul doesn't appear on it at all except in the inner sleeve photo. The cover is awful, a picture postcard punk/ collage. The press pulled it to pieces, the fans agreed on the whole, the band didn't like it- in 1986 Joe said he hated it.

This Is England survived Cut The Crap, eventually re- admitted into a recent Clash compilation and Strummer himself claiming it as 'the last great Clash song'. But mainly what The Clash Mk. II proved was that Bernie had been a disaster and that Mick Jones was a/ the significant musical and song writing talent- Mick demonstrated this fully a month before the release of Cut The Crap with the debut B.A.D. album, a superb and easy sounding album full of drum machines, samples from films and catchy, relevant songs.

Earlier this year Gerald Manns took Cut The Crap to pieces and rebooted it. Many of the songs from the album were available on bootlegs in a form more as Joe intended, from gigs and demos and Gerald and other fans claimed a decent Clash album existed inside Cut The Crap. Gerald has taken whatever versions he can get hold of as inspiration painstakingly, ripped Joe's vocals from Cut The Crap, cleaned them up and then reconstructed the songs. De- Berniated them, as he puts it. The reconstruction involved recreating Pete Howard's drum tracks using a drum machine/ programme that sounds like a real drummer and then rebuilding the guitars himself, playing along to what he can glean from the album. Gerald has since put his versions of the songs from Cut The Crap on Youtube, a reimagined version of the album along the lines of what could have been released if the Strummer/ Simonon, White/ Shepperd/ Howard group had recorded them as a band. They're worth a listen if nothing else and show what could have been if Joe had held his nerve and kept Bernie out of the studio (or if Paul had left as he threatened to and surely wanted to given his lack of involvement in the album, his loyalty to Joe the only thing keeping him in the band. If that had happened Joe and The Clash had ended there and then, Joe might have recorded these as his solo debut. The whole album is on Youtube but I'll offer a few highlights.

Three Card Trick (Rebooted) rumbles nicely, Joe in good voice and the guitars slashing and burning, the sound of the 1985 five man Clash recreated at home.

The Dictator (Rebooted) is another winner retrieved from the original album, Joe's voice audibly from an inferior source but sunk into a two guitar, straight ahead, heads down, retro punk sound.

Ironically, This Is England (Rebooted) is the one that for me sounds least good, maybe because the version released in 1985 actually works and works well. This sounds smaller somehow and shows that drum machines and samples weren't necessarily the problem with Cut The Crap. I'll happily keep the original.
The rest of the album is out there, you can find it all on Youtube if you're interested and I accept this is a very niche subject matter. You could argue that this entire enterprise is against the spirit of The Clash, who were always pressing forward and progressing in different directions, often many at the same time. But in the spirit of what things could have been like, it's worth giving the songs a go.
Joe and Paul went on to patch things up with Mick quickly and Joe produced and co- wrote the second B.A.D. album, No. 10 Upping Street, with Mick having tracked him down and apologising for sacking him. That album contained this, a song as good as anything either man wrote or recorded in the 1980s.
V Thirteen (Extended)
Posted by Swiss Adam at 08:00

I'd heard about this and had been meaning to search it out so thanks for posting. Good versions but you're so right about This Is England.
I always got the impression that as soon as Joe heard what Mick was up to with BAD he cringed a bit inwardly and knew what he had to do. Make up and muscle in on album number 2 basically...

I don't think Joe knew what he was doing, he was lost and foundering, knew he'd made a mistake sacking Mick, ploughed on regardless, heard Mick moving on etc etc. Complete loss of confidence.

The mere mention on any fan site of the MK.2 Clash in general or Cut the Crap in particular, is guaranteed to kick up a storm of contrasting comments - still a hotly debated issues all these years later. I went to see the post-Mick line-up at Brixton Acadamy in 1984 and left in tears, giving away my tickets for the following night's show in the street afterwards. The next time I saw Joe in concert was with The Latino Rockabilly War at the Rock Against the Rich concert, Camden Electric Ballroom in 1988, where he played an inspired career spanning set from 'Keys to Your Heart' to 'Sightsee MC' & 'V.Thirteen', via 'Love Kills', 'Trash City', 'Somebody Got Murdered' and, yes, 'This is England'.

That Latino Rockabilly War gig is the stuff of legend Swede.

Yeah I can't listen to Cut The Crap. How the label even allowed that album title with the diminished returns the album provided is beyond me.
Where Big Audio Dynamite sounded like the next progression of The Clash sound, Cut The Crap has that air of desperation we know was truly nagging at Strummer by the time he got the band into the studio.
These remake/remodel tracks are interesting and show that Strummer could still right Rock and Roll songs, but it's a curiosity to me, nothing more.
SA you are spot on in your assessment of Strummer in those middle 80s years. One of his best mates was Clash photographer Bob Gruen, who my agency represented at the time and Joe spent quite a lot of time in NYC right up to about the time of his involvement with No. 10 Upping Street. He soaked up a lot of New York street culture and sounds at the time and I believe a lot of this found its way to influencing his solo work.
I love his output with The Mescaleros and Latin Rockabilly War. He let his artist voice come through with no restrictions, no cow-towing to others' expectations. Rock Art And The X-Ray Style is Strummer raw and exposed and reveling in his new found freedom of direction.

Great post, Adam. I had no idea about The Clash remakes/remodels when I posted my Big Audio Dynamite playlist on Tuesday, but it's a useful parallel of Jones & Strummer's divergent paths in the mid-1980s. Mick was right on the money with B.A.D., producing some brilliant 12" singles and a debut album that remains essential, nearly 4 decades later. I couldn't even listen to Cut The Crap when it came out, I didn't particularly like This Is England (although I do now) and The Clash were a band out of time, in more ways than one.

V. Thirteen was a brilliant single, for many reasons, but especially because of the Jones/Strummer reunion. The full 12" version is the one to go to, every time.