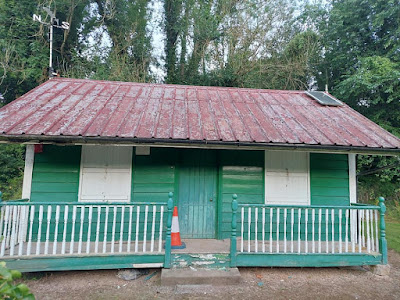 Martin Jenkins has been a regular postee at this blog over the last couple of years in his guise as Pye Corner Audio, his battery of synths responsible for some beautiful work on his own and as a remixer (not least the six Pye Corner remixes of the songs from Andy Bell's solo album of last year, a technicoloured, cosmische re-imagining of the songs). Now Martin has another alias, The House In The Woods, and a new album, The Spectral Corridor. The eight tracks contained within are all long songs, the shortest just under eight minutes and the longest coming in at ten minutes seventeen seconds. On The House In The Woods Bandcamp page The Spectral Corridor is described as 'a doom infused set of stygian sludge drone that calls to mind the faded hinterlands of early electronic music infused with modern menace' and if that doesn't set your pulse racing I don't know what will. The tracks on The Spectral Corridor are built around repetition and throbbing, sinister synth tones, and are not for the faint hearted, the opposite of chilled out ambient. It is like the soundtrack to a dystopian 70s sci fi/ horror programme shown late at night on BBC2 or those public information films where children die on pylons or in slurry pits on farmyards. It's beautifully done and has a refusal to go anywhere quickly, but lets the listener sink into the sounds and wallow in the murk.

Spectral Corridor Part 3 is a menacing, slowly building nightmare which keeps on building, the humming noises increasing as a ghostly topline wavers in and out. It is quite possible it will freak your shit out.

Quadratic is slightly less threatening, content to merely unsettle the listener, the sound of Tangerine Dream having a bad trip. You can listen to the whole album and buy it at Bandcamp.

Labels: pye corner audio, the house in the woods

Spectral Corridor Part 3 did very nearly freak my shit out, not helped by the unnerving half-face at the bottom of the album cover. Is it me or do the eyes seem to follow you around the room?! Great (or should that be grave?) sounds.