The Way I Feel 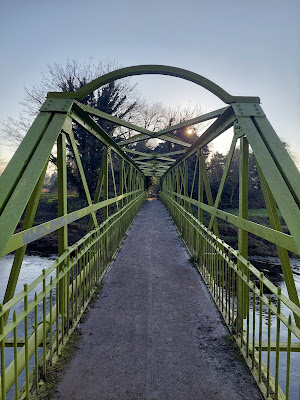 In the days immediately following Isaac's death we were overwhelmed with cards and flowers, so many that it became difficult to find space for them all in the front room. Among the hundreds of messages of love, condolences and support came a card from a friend with a quote from Raymond Carver on the front. It turns out that this little piece of poetry called Late Fragment is inscribed on Carver's gravestone. 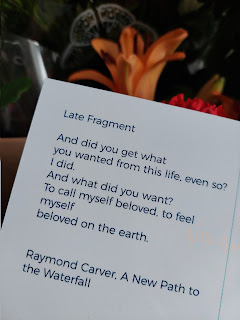 The poem had a big impact on me when it arrived in December, in the early stages of grief while also organising Isaac's funeral and trying to pull together his eulogy. It hits me still reading it now. It's beautiful, saying so much in so few words.

Raymond Carver wrote short stories, usually about the quiet and sometimes sad and lonely lives of ordinary American men and women. His writing tends to lean towards brevity, realism and reflection. I remember reading a book of his short stories in the late 80s, probably because I read a review of it when he died in 1988. I hadn't then thought of Raymond Carver's work until three summers ago when I read Dave Haslam's Sonic Youth Slept On My Floor and he mentioned Carver. I ordered a book of his short stories and read it while on holiday in France and found it a very different experience reading Carver and about the people in his stories in my late 40s compared to first reading them in my late teens.

Yesterday while scrolling aimlessly through Twitter on my phone I was stopped in my tracks by a poem by Constantine Cavafy, written in 1904. Cavafy was Greek and wrote in Greek so are a few few slightly different translations but this one was the one I found and had a similar impact to Carver's all those week's ago. 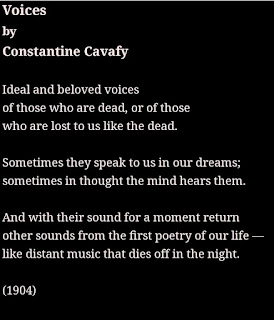 It doesn't go away, it's always there but sometimes I now find myself doing things- reading, writing for the blog, teaching, watching something on TV- where for a few minutes it has gone to the back of my mind, where it's not immediately present and causing a ball of pain in my chest and stomach. It crashes back in suddenly, hitting me anew. Sometimes it's triggered by something- a photo of him or being in a place where we used to go. Sometimes, like yesterday while out walking before it went dark, it was suddenly thinking about his hands, possibly because when we walked I'd hold his hand. Grief is a fucker, it sneaks up and crushes you and does it time and time again. Onward we go though, because there's nothing else to do, is there?

Today's music is more from James plus this blog's patron Andrew Weatherall. James moved to Rough Trade after leaving Sire and put out two singles that again should have been hits but weren't- Sit Down and Come Home. The latter was a November 1989 release, the Manchester scene well in the ascendancy, The Roses, Mondays and 808 State gatecrashing Top Of The Pops. Finally, leaving Rough Trade and washing up at Fontana, in June 1990 Come Home was re- released and made it through to radio and TV. According to Wiki it still only peaked at number 32- I thought it got much higher- but it slipped into indie disco and popular consciousness. It was remixed by Weatherall, a massive sounding summer of 90 indie- dance tune, a track that is all sirens and synths, a breakbeat and a huge bassline, a sample from Stutter, a lovely piano riff five minutes in, and that breathless Tim Booth refrain, 'and the way I feel just makes me want to scream/ come home/ come home/ come home'.

On some releases the remix is labelled the Andy Weatherall Remix, on some the Skunk Weed Skank Mix. It seems they are the same mix. I think Skunk Weed Skank seems more likely to be what Andrew would have titled it.

That is some meaningful writing.

Beautiful words, and I don't just mean the poems.

Those are beautuful poems, and such great, honest writing from you too. I know everyone's experiences of grief are different for so many reasons, and incredibly personal - but I hope you won't mind if I just share something I felt through the first and most significant bereavement I had some years ago. I can only explain it as this - it was as if my eyes had been opened to a huge, new understanding that I wasn't alone, that I now shared this particular human experience with others. I looked around at people at work, or in the street, on trains and shops, etc. all going about their daily business in normal ways, and it suddenly dawned on me just how many of those people would have gone through some form of grief and loss too. I found it helped to remind myself of this. Your words, "Onward we go though, because there's nothing else to do, is there?" is a perfect summing up of how humans have to, and amazingly do, cope with the saddest, hardest experiences, and thinking about that I found I could appreciate an unspoken sense of unity with people I didn't even know.

That seems very profound C. It seems so personal to us right now but you're quite right, it's something lots and lots of people are going through. People do have the capacity to deal with almost anything- we've stared Isaac's mortality in the face before especially when he was younger and very ill and come to terms with it. Time is the healer, people keep saying and I'm sure it's true.

Echo what C has said Adam. Grief is intensely personal, we always think we are alone, surrounded and swallowed by it, but the truth is somewhat different. Many people are with you, through shared or their own experiences, offering whatever they can to get you to the places where, although it will never truly heal, the rawness will melt away to leave a more mellow understanding and happier reflections on memories. I remember when my mother was dying at home, my girlfriend at the time would drive past our house on her way back from work and said to me at the time 'no-one would ever know what you are going through behind your door'. Very wise words (she's now my wife, so I got something right), but we never know what others are going through, we can only ever see our own grief. Just remember, you're never alone.

I can only echo the comments already left Adam. As Rickyotter says, you're never alone.

I've been carrying your words (& the comments) around with me for a couple of days, Adam. I'd been remembering a good friend the day before and posted about the songs played at his service in 2009. One of the readings was Death Is Nothing At All by Henry-Scott Holland, which I'd never heard before then but which has remained with me since. It's told from the perspective of the person who has passed and amongst many great lines is this one:

And the old life that we lived so fondly together
is untouched, unchanged.
Whatever we were to each other, that we are still.

I am continually moved by your expressions of the pain of loss and heartbreak, as well as inspired by your strength and determination.

There is another line that meant a lot to me:

Why should I be out of mind because I am out of sight?

...which I understand more with each passing year.

Thanks Khayem. Had a rough old day today and that just made me smile and well up at the same time

Really loving this one! Thank you for sharing Adam