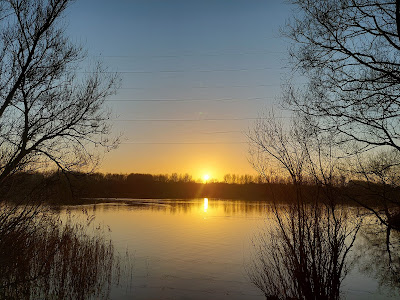 One of last year's lesser known treats was The Vendetta Suite's debut album, The Kempe Stone Portal. Remixes are out now of two of the tracks, Belfast Balearica in full effect. The 12" has a David Holmes remix on the A side, a wondrous rolling, euphoric, shimmering psychedelic Holmes version of Purple Haze, Yellow Sunrise. Gary Irwin, the man behind The Vendetta Suite, gave Holmes tapes every week back in the early 90s and was eventually asked to become David's studio engineer. The B-side features two remixes of Warehouse Rock by Timmy Stewart, another long standing Belfast DJ and producer with connections to the early 90s Belfast scene. Timmy's 6 Minutes To Sunrise Remix relocates The Vendetta Suite to the Mediterranean and early 90s Italo house, a languid, blissed out groove. Buy here.

That's a really striking photo - got to be the water park with the power lines overhead...

Yes, the water park at dusk a couple of weeks ago.