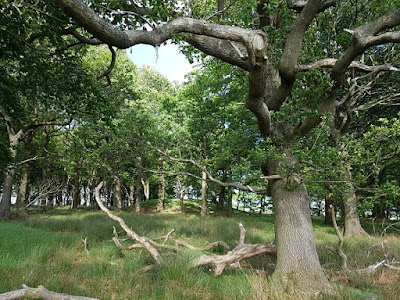 2020, it goes without saying, has been a year unlike any other. When the first lockdown kicked in back in March, schools were closed and everyone bar essential workers was told to stay at home, I briefly wondered if writing a music blog was suddenly a redundant activity, a bit futile and inadequate in the face of what was happening. The fear back in March was real, the scenes of people dying in hospital corridors in Italy coupled with rising case numbers and deaths and the sheer ineptitude of our government made everything else- even Brexit- seem inconsequential. In fact, as the weeks of lockdown turned into months and now almost a year of lockdowns and Tiers, music has been one of the things that has helped and despite our individual isolation has been one of the things that has brought us together. Anyone that has logged onto one of Sean Johnston's Emergency Broadcast Sessions and seen a community coming together in the chat function, enjoying hours of Sean DJing and chatting away will have seen how important music is as a release, as a connection and as simple escapist enjoyment. And despite everything there has been loads of great music made, written, recorded, produced and released this year. In some ways, I've enjoyed more new music this year than in many recent ones.

Albums Of The Year

The best albums this year seem to have reflected the year (some of been made as a result of lockdown and time artists have had to create). There are masses of albums that have been floating around and that caught my ear. Before I get into the list proper, these ones have all been part of 2020- Wedge by Number, an exuberant post- punk, dance album with an ACR remix to boot, Julian Cope's Self Civil War (my last gig before lockdown, in February, was Julian at Gorilla), Steve Roach's Tomorrow, Rickard Javerling's 4, The Orb's Abolition Of The Royal Familia (or at least parts of it), Youth and Jah Wobble's Acid Punk Dub Apocalypse (an album with multiple guest stars, including Hollie Cook, Alex Paterson, Blue Pearl and beats from Andrew Weatherall and Nina Walsh and which sounds good when it's playing but which I can't remember much about when it's not), Rose City Band's Summerlong (the latest Ripley Johnson project, cosmic country/ boogie, some of which is superbly out there, a blissed out version of Laurel Canyon), the nine remixes that made up Unloved's Why Not release (including a superb Richard Sen remix and dub plus outstanding remixes from Phil Kieran, Hardway Bros and The Vendetta Suite), a similar release by Joe Morris, nine remixes of his Balearic album from the year before compiled as Exotic Remixes, and a follow up to his The Malcontent Volume 1 by Duncan Grey (who drip fed us some great standalone songs throughout 2020 before giving us The Malcontent Volume 2). An honourable mention too to three albums that were made decades ago but only saw the light of day this year- Neil Young's legendary Homegrown, Rig's Perfect and Bushpilot's 23, three very different but better late than never albums.  I also loved A Man Called Adam's career spanning oddities and extras round up Love Forgotten, a digital only release that packs a huge amount into it's twenty songs.

I know that I should have heard Working Men's Club by now and just haven't got round to it despite them appearing to be right up my alley. They're on my list, as are Sault who everyone else I know raves about and I just haven't dived in there yet.

These are the twelve albums that have been the pick of 2020 at Bagging Area, in roughly this order even if finding a meaningful way to rank them is really tricky. The albums at the top of the list could be placed either way round depending on which I'm listening to at the time.

A strong set of electronic songs and grooves from Kelly and a step on from her debut (which I loved). Corner Of My Sky, intense, weather beaten 2020 techno with John Cale's vocals stood out but everything else on it, from the banging grooves of Melt! to the bleary eyed soundscapes, sounded as good.

GLOK's 2019 record was as good as anything else out last year. The remix album was trailed by one of the final Andrew Weatherall remixes, a beautiful but low key, urban ambient remix of Cloud Cover. Across the rest of the record were some equally innovative versions from Richard Sen, C.A.R., Leaf, Minotaur Shock and others and from GLOK (Andy Bell himself).

A beautifully meditative set of treated piano pieces that drift out of the speakers and around the room. Made perfect sense back in May when I was raging about VE Day and contemplating turning fifty.

Five long tracks made with modular synths, lovely pulses and washes of sound, hypnotic analogue sequences and gentle drones that built on his Abstractions records from 2019 and his excellent Music For Healing series from the spring and summer- deep listening for difficult days. Richard has made some of the defining sounds of 2020 for me.

9. The Long Champs 'Straight To Audio'

Released as lockdown struck Kieran Hebden's latest record, three sides of vinyl plus a fourth of locked grooves, is a distillation of everything that he's good at. Teenage Birdsong came out in 2019, those skippy beats and lighter- than- air melodies pointing the way, and the rest of the album lived up to it. When I was hearing this in March it seemed like it made a stake to be the year's defining record and it hasn't diminished that much in the time between. A cut above most of the rest.

Rheinzand are a trio from Belgian who have made the darkest disco and the headiest sounds of 2020, a stunning twelve song record with a hot, sticky cover of Talking Heads' Slippery People and in Fourteen Again a song to keep picking up the needle and putting it back to the start. One of those albums that made you/ me forget everything and just focus on being in the music, in the moment.

This record sound tracked March for me and will forever be the music of lockdown 1- drones, industrial ambience, some intense and dense atmospheres and mesmerising waves of noise. It is beautiful and ominous and sometimes a really difficult record to pin down. These are the sounds that increasingly have been where I've headed as the year has gone on and if Daniel hadn't recorded another album in lockdown that just pips this one, this could easily be my album of the year.

5. Sonic Boom 'All Things Being Equal'

Pete Kember's first new album in decades, an analogue synth based set of songs that are exactly what he's been doing for three decades but which sound like a new idea. The lead single, Just Imagine, is one of my favourite songs of this year and it sits among the hypnotic, beguiling, psychedelic trip of the rest of the record. When it's on the turntable it engulfs you and fills the room, Pete seeing through his own hallucinations to deliver a political message of kinds- the way you live your life matters.

On the morning of February 17th Daniel Avery was in his metal box studio when he heard of the death of his friend and mentor Andrew Weatherall. He captured his feelings in this piece of music, four minutes of emotional, instrumental dance music that captures the spirit of the man and how many people felt with him suddenly gone- a breakbeat, some synths, an unfolding chord sequence and what appear to be the root notes of Smokebelch occasionally peaking through. In a year where emotions have often been very close to the surface, Daniel made a piece of music that is simple and minimal but layered and nuanced and extremely moving. Proof as well that music helps, and that when times are hard music is often the answer.

Another excellent list, two thirds of your album list are in my top albums (still having trouble narrowing it down) and lots for me to explore on the singles etc list. It's been a truly odd year,but music has pulled me through some low moments.

Some great choices in there, Adam; I'll get a few playlists out of these, that's for sure!
I've really enjoyed your writing and photography this year and look forward to more in '21.

There some excellent choices in your lists that will appear in my list as well. As you said - music helped me to stand the hard times this year. All the best to you and your family - stay all well.

Excellent lists, Adam. A few of these I bought this year on the back of your original posts/recommendation and I'm glad I did, so I'll definitely be checking out a few more that I haven't yet got around to. Thanks for a truly outstanding year of posts, too, always varied but a real personal insight into the craziness of 2020 and the power or music that I could really get behind. I'd echo John's comments as well about your photography - I look forward to the daily pic as much as the posts and the music selections. Thanks again, I hope you and your family have the best possible festive period, under the circumstances. Cheers, Khayem

SA, thank you for another year of blogging which has introduced me to a lot of great new music. I too remember that feeling at the beginning of the pandemic about whether or not it seemed to trivial to blog, also how to pitch things, get the tone right etc. - we were still in shock I guess, conscious of being insensitive - but I'm so glad everyone carried on! Just seeing daily posts really helps to ground things - a reassuring constant in these everchanging times, and the importance of music has definitely been highlighted.
Fab photos from you too as has been said already!

A superb list Adam, a lot of it mirroring my own listening in this strange year. And that's probably a testament to your year of blogging - so many great recommendations have led me into great discoveries and further rabbit holes down which to wander. In a year when music has provided much of the stability, comfort and joy, that's been a real gift, so thank you

Fantastic lists Adam! Love seeing so much crossover with my list and very interesting where we have the artist in common but went for a different track. I must say I deserve some credit for getting your Top album choices right! I will reveal mine in a couple days.

Thanks everyone, comments and praise from fellow bloggers and regular readers mean a lot.

Roisin Murphy, Kelly Lee Owens, Andy Bell and Green are a few from a handful I know and enjoy, but there are so many here where I need some educating. Seeing some of the same names pop up at Drew's, Echorich's and Walter's places. About time for me to jump on the bandwagon. Thanks for taking the time, Adam. These lists get me through the dark days after the holidays.