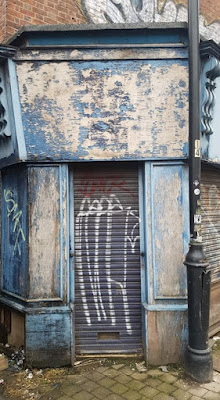 Sandinista! was released forty years ago yesterday. This video of The Magnificent 7 appeared online, previously unseen footage of  Joe, Mick, Paul and Topper in New York in 1980, the fans and police in the streets around Bonds Casino, the band playing on US television and at a press conference all smoking like it's going out of fashion, some brilliant fan level scenes from the floor of the venue, security man Ray Jordan in among the crowd, and superb footage of the stage invasion at the end, Mick's hand and guitar disappearing into the throng- all put together by Don Letts. The video is here in case you're reading this on a phone and the embedded video isn't working.

Sandinista! is a an album that grows and grows as the years go by. On it's release in 1980 it mystified fans and press alike, thirty six songs over six sides of vinyl. Only three years on from their debut, recorded in the white heat of 1977, Sandinista! is the band's sprawling soup of influences and experimental spirit writ large, from the pioneering rap/ funk rock of The Magnificent 7 to the dub soundscapes that make up side six. In between they play rockabilly, blues, a waltz, reggae, fiddle led- folk, plenty of dub, gospel, Mickey Gallagher's kids singing Guns Of Brixton, majestic late 70s rock (Somebody Got Murdered, Up In Heaven and Police On My Back), a backwards track, a Motown song celebrating the UK independent scene, one of the hidden gems of their career in the shape of the calypso- rock- reggae groove of The Street Parade, a disco tribute to Studio 54 and the Cold War sung by the drummer and two songs that are so far from White Riot that they could be the work of a different group- Broadway and Something About England. Sandinista! is the mixtape, the playlist, the shuffle function, the rarities/ outtakes box set, decades before these things happened. Sandinista! is a work of madness and a work of genius, a beautiful mess, an album that still has the capacity to surprise, songs that suddenly reveal themselves in a new way. It demonstrates the breadth of their vision and ambition, a Clash radio station playing song after song after song. One song sounds especially relevant to life in the UK at the fag end of 2020, more and more prescient as this country has lurched from 1980 to 2020 in the blink of an eye...

The rise of the far right in the 1970s is well documented, marches by the NF in areas of London largely inhabited by immigrant communities, as much a reason for the formation of Rock Against Racism as Eric Clapton's racist claptrap on stage where he celebrated the words of Enoch Powell. Since the Brexit vote in 2016 English exceptionalism has taken centre stage, the idea that there is something that sets England apart from every other country is the driving force behind the current bunch of chancers and idiots in the cabinet and seem to be Johnson's main negotiating tactic in the last minute Brexit trade deal talks taking place right now. They genuinely believe that once England is free from Europe and has 'freedom' and 'sovereignty' the nation will rise unshackled, back to the glory years of Churchill, the war and Spitfires flying over the white cliffs of Dover. The Brexit vote was partly fuelled by anti- immigrant rhetoric, the same feelings that fired up the far right in the 1970s. The factors involved- EU freedom of movement, Tory austerity policies after the banking crash of 2008, the view that immigrants from Eastern Europe have stolen jobs from British workers, Gordon Brown and his encounter with 'that bigoted woman' in Rochdale in 2010- aren't very far away from National Front campaign leaflets in the 70s.

Something About England nails all this in its title and then depicts this racist, anti-immigrant rhetoric and English 20th century history in a three minute forty- four seconds long song. As the music hall brass band parps into earshot, Mick opens the song with these lines-

The song then lurches into a different area, an out of tune guitar chord and some crashing rimshots and Mick continues with his tale...

Mick carries on describing the homeless man, blue lights and sirens going off as it's kicking out time at the dancehall, and he hopes the old man will be able to 'explain the gloom'. At one minute Joe interjects, the voice of the old man. It goes back to Mick for a line and then at one minute fourteen there's a crashing run down the piano keyboard and Joe takes over, singing verses that describe the old man's life in the first half of the 20th century- 'the fourteen- eighteen war... the sorrow afterward', the poverty in northern England (as described by George Orwell, an author Joe must surely have read), the Jarrow hunger marchers, the rich with their garden parties and mouths full of cake, the Second World War (portrayed here not as the great patriotic pinnacle of English exceptionalism but as 'five long years of bullets and shells/ we left ten million dead'). The survivors return not to cheering crowds and flags or the sunlit uplands of post- war Britain but instead...

The music is vaudeville music, a sort of punk/ Edwardian music hall hybrid and a choir of ghostly backing voices make an appearance, the dead of the wars and those dispossessed by government social policies as Mick plays a vicious guitar line. Joe's last verse dissects the English class system, something never far away for a man who hated boarding school with a passion and what it did/ does to generations of British youth.

All that strife, war, death, destruction and unrest and the English class system remained cast in stone. The forelock tugging, cap doffing deference Joe describes is as true now as it was in 1980, the generations of English voters who go to the polling station and place their X next to the name of anyone with a posh accent and Eton education, saddling us with Johnson and his ilk. Joe's role as the old man, spitting his lines out at Mick in the song and the listener through the speakers, comes to a conclusion as the music stutters to a halt, the old man worn out by his memories-

The reprise sees the band come back in softer and more mournful, Mick's voice returning, the streets deserted and the lights going out, before the kiss off final line...

And that's where we are right now, shunned by Europe and estranged from our neighbours, a country with little self- awareness that has become a laughing stock, looking at itself in a mirror and seeing what it wants to see, not what the reflection really shows us.

This song has always been genius. People (me included go on about the self titled first album and London Calling but Sandanista! is right up there, albeit for different reasons.

A great piece of writing about Sandanista! and the madness of Brexit. Thank you.

I have so much love for Sandanista! and your description captures so much of what I love about it SA!
There are four songs that, for me, capture the brilliance of The Clash in 1980 - Somebody Got Murdered, The Street Parade, Charlie Don't Surf and Something About England. All four songs focus on the disenfranchised, down trodden and forgotten. As the 70s slid into the 80s, The Clash could see that nothing was set to change and much was stacking up to be worse.

People focus on Sandinista! as being a work of largess. What is, is a work of LARGENESS, that a Punk, or at this point, Post Punk band, was not meant to be making. It is an album filled with wild ideas and great energy. It is an album that bursts at the seams because its makers were all bursting at the seams.

Finally I want to point to Corner Soul as one of the tracks on Sandinista! that pointed to the growing blurring of lines between Big Business in and the governing of Third World nations, especially in Africa. The track even feels like its influenced by Afrobeat and Juju. I decided to listen to Sandinista! , prompted by the anniversary, and Corner Soul really stood out for me.

Hi, great piece about a beast of an album by the 'only band that mattered' Thank you good sir.

I don’t see the video you mentioned

Are you reading on a smart phone Lee? Youtube videos aren't appearing on phones since the new blogger came online. John Medd tried to help me fix it but I haven't been able to yet. I can put a link in to take you to it.

Yes I was on a phone

Great article. Love this record, never gets old. So many great tunes....the ones you mention and others. Broadway for example....sounds like it could be off Combat Rock, it shares that trippy jungle vibe. Still the best band