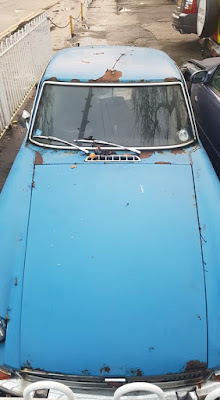 Following on in an almost straight line from yesterday's Richard Wanfried post, a very long Klaus Schulze instrumental featuring E2- E4 composer/ guitarist Manuel Göttsching, this is the 1989 ambient/ Italo - house classic Sueño Latino, ten minutes of summer to banish the mid- December blues, bringing some colour and some warmth to our current world of cold, semi- permanent darkness. Sueño Latino were four Italians-  Andrea Gemolotto, Claudio Collino, Davide Rizzatti and Riccardo Persi - who created this ten minute classic, built around Göttsching's E2- E4 and some birdsong, a hit around Europe and released in umpteen formats and countries. Discogs lists it as being released as a single in 1989, 1991, 1995, 1996, 1997 and 2001 and on no less than 243 compilations. None of which takes anything away from it, a song with all the right elements in exactly the right places.

Always worth a listen: https://m.youtube.com/watch?v=ys0HyevZpQg

I've got this, somewhere. Got my first CD player in '89 and then went out and bought loads of CDs. Loved the ambient music back then and this was one of my favourite tracks. Not listened to this since...probably 1989.

Yep, Johnny, always worth a listen.
Glad to re- acquaint you with it Webbie.