Judy In The Starry Sky 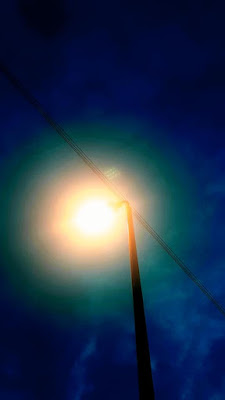 Lol Hammond is not a man to sit around twiddling his thumbs. He started out in Spiral Tribe and The Drum Club in 1991, formed Slab with Nina Walsh, recorded with Matt Rowlands and Mandy Wall as Girl Eats Boy, has made albums with Roger Eno, collaborated with Chris Coco on soundtrack inspired music, has been the music supervisor and soundtrack artist on a slew of British films and has recorded two albums with Duncan Forbes and now a new project as Are We Superheroes?
Girl Eats Boy released an album in 1997 called Thrilled By Velocity And Distortion, a record chock full of breakbeats and samples bursting with energy.  The song titles on the album were a joy- take your pick from Napalm In Bohemia, Kill Pussy Kill, Moist Babe Hates The Government, Surfing In Reykjavik- and this one, Chemical Phunk, which shows where their heads were at. Samples Sabres Of Paradise too unless I'm very much mistaken.
As Slab Lol and Nina were immersed in electro and techno, making repetitive, minimal music for small clubs. Their 1995 track Atomsmasher was remixed by Andrew Weatherall (and engineered by David Harrow) with one version (Mix 3) on the 12" and another (Mix 1) on white label 10". As with most Weatherall remixes from the mid 90s this is a long, progressive techno track with weird noises as standard,  and plenty going on to keep you interested up to the tenth minute.
Atomsmasher (Weatherall Mix 1)
More recently Lol has been active with Duncan Forbes (formerly of Manchester based DJ/ production duo Spooky , stalwarts of the live and club scene in the mid- 90s). Lol and Duncan released a lovely album earlier this year, Who Will Stop The Robots, ten tracks that skirt the edges of ambient, drones, dreampop and glistening psychedelia. I posted a song called Sorry Kids We Left You With A Black Sun previously. This one, Snow Ghosts, has a dark, slow motion beauty and the voice of Eve Abraham.
If that isn't enough at the end of November Lol put out the first release by a new group he's formed with Karen Frost and Stefan Gordon, Are We Superheroes? Judy In The Starry Sky has a pleasingly skeletal drum machine banging away, Karen's vocals and a distorted guitar part that reminds me of lots of my favourite guitar bands. If you like the c86 bands or grew up with NME and Melody Maker, 4AD, Rough Trade and Creation you'll enjoy this a lot. Available at Bandcamp at the name your own price deal.
Posted by Swiss Adam at 08:00

Back in May I took a good look at Lol Hammond on your recommendation of his project with Duncan Forbes. Since then I have kept an eye out for more of his work and stumbled on the Are We Superheroes? single the day after it hit Bandcamp. Can't get enough of it. Love the minimalist, early 80s meets Garage Psychedelia of the track - right up my alley!

I haven't listened to Who Will Stop The Robots in its entirety, but on the strength of Snow Ghosts and Sorry Kids We Left You With A Black Sun, I really should. I'll check out Are We Superheroes? too.

As a footnote, Spooky are still very much a going concern with (as far as I'm aware) both Duncan Forbes and Charlie May. They brought out the excellent Bells Of Fury EP in October, which I've been listening to constantly and is available on their Bandcamp page.

Nice one Kheyem! - Bells Of Fury is excellent! Always loved their early Guerilla Records Progressive sound and especially the Underworld remix of Schmoov. There's a remix of Chapterhouse's We Are The Beautiful - Spooky's Ugly As Sin Mix) that used to get ample play in the NYC Clubs in the early 90s. Their psych-out remix of Lush's Undertow is quite brilliant as well.