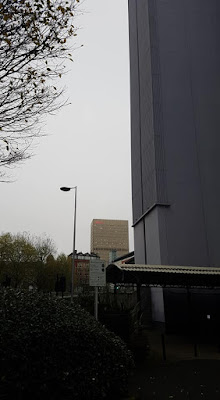 A long song from 1981, that came to my attention via Dr. Rob (Ibiza/ London veteran currently resident in Japan) and his tribute to Jose Padilla and the Balearic sets he played at the Café del Mar. Druck is eighteen minutes long, the work of Klaus Schulze, a pioneer of West German cosmische music and briefly a member of both Tangerine Dream and Ash Ra Tempel. Schulze took on the alias Richard Wahnfried and had the good fortune/ good judgement to get Manuel Göttsching in on guitar, the man who recorded the legendary E2- E4.

Druck is led by Spanish guitar plucking and Schulze's spaced out synths and some gentle drumming, and then acres of rippling rhythms, blissed out sounds, an extensive guitar solo, more Spanish guitar, some echo- heavy percussion and a gathering intensity. All very organic sounding. Druck comes on a double sided record called Tonwelle, paired with the slightly longer Schwung. At some point after '81 a copy made it's way to Ibiza where Padilla wove it into the sets he played at sunset at the Café del Mar.

I've had Klaus Schulze records in my collection since I was a kid. I also once owned something by Richard Wahnfried, but do you know I don't think I ever realised that they were one and the same person - or if I did I've long since forgotten the fact. Amazing.
It's going to be another very long week of bedlam in the supermarket aisles, but right at this moment I have a coffee in my hand and Druck in my ears, so it's all good.

I know this track as 'Pressure', I presume the english translation. A beautifully organic record. It makes me want to throw in all my chips at the balearic bank.
-SRC

Glad to clear things up Swede. I sympathise with your long week of supermarket bedlam. Life in the education sector is pretty fraught at the moment too.

SRC- love the phrase 'throw all my chips in the balearic bank'.

The album Tonwelle that this is taken from is superb, crystalline Berlin-School. Wahnfried's debut Time Actor, featuring featuring Arthur Brown, is a genuine classic.