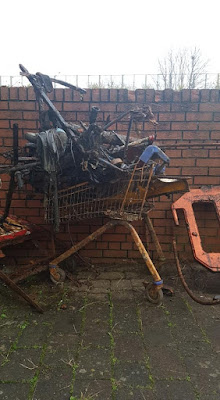 This ambient/ kraut hybrid was recorded by Brian Eno and Harmonia in 1976. Eno heard Harmonia in the early 1970s and said they were 'the most important band in the world'. A trio made up of Neu!'s Michael Rother and Cluster's Roedelius and Moebius has as good a claim to that title as anyone I guess. Eno eventually hooked up with them in Forst, in rural Lower Saxony, West Germany. They worked on some sessions for nearly two weeks before Eno headed onto Berlin to meet Bowie and begin work on what would become Bowie's Berlin Trilogy. Puzzlingly Harmonia '76 (as the Harmonia- Eno collaboration called themselves) then left the master tapes unreleased until 1997 when Roedelius rescued them and put them out as Tracks And Traces. A 2009 re- issue expanded the album with some digital clean up of the cassette recordings. Atmosphere was one of the additional 2009 tracks, three and  a half minutes of arpeggio, synth textures and a rhythm track that is made up of hiss and echo.

Harmonia's debut was the self- explanatory Musik von Harmonia, a record they put together in 1973 using a very basic mixer and three tape machines, a Farfisa organ, a piano, a rhythm machine and some guitars and a very open-ended approach to making music.

I finish work for two weeks today. I could add lots to that but for the moment I'll just say it's been a long time coming and a rest is very much needed.

Interesting choices, and a good listen.
Enjoy your break SA, my college broke up yesterday. Feels good already but I really feel for friends in secondary senior management.

The day working at home today they gave us will now be used trying to get to grips with yesterday's 11th hour announcement about staggered entry, testing etc. Wankers.