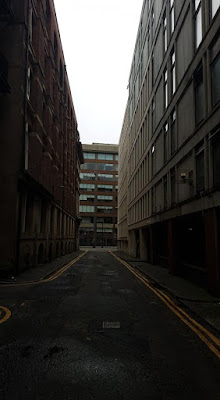 James Holden released an album in 2013 called The Inheritors, fifteen tracks that demolished and (deep breath) deconstructed electronic music. On Delabole he took the entire idea of the song structure to pieces, a track that seems chaotic but eventually finds a kind of groove and re- adjusts itself, making sense of noise.

Towards the end of the album he produced his best piece of work (with the exception of his remix of Nathan Fake's The Sky Was Pink), an eight minute journey with rippling melodies and waves of sound, a blissed out flipside to Delabole. I visited Blackpool a few times in the late eighties and I have to say it didn't feel like this sounds but maybe James went on a day the sun was shining. Regardless, Holden made this superb piece of emotive, melancholic techno and found a previously unknown link between the Fylde Coast and West German electronic music of the 1970s.

This album is utterly amazing, as is the follow up. Go see him live. I took my kids and now they are fans! The man is a genius

Never seen him live, will look out for him if gigs ever start again.