In A Lonely Place Again 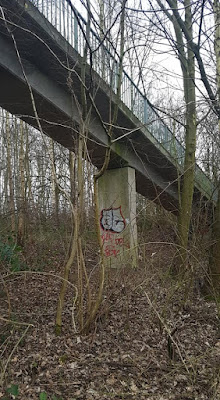 The In A Lonely Place cover version tribute to Andrew Weatherall by his brother Ian and Duncan Grey and the remixes courtesy of Keith Tenniswood, Sean Johnston and David Holmes, have sent me back to the original. In A Lonely Place came out in January 1981, the B-side to Ceremony, New Order's first release. Ceremony, with it's ringing guitars and pace has a celebratory feel, a sense that the three surviving members of Joy Division have somehow made it through the night and seen the dawn break. In A Lonely Place doesn't- it is a funereal dirge with Bernard singing Ian's lyrics which can only be read as a cry for help, a man at the end of his tether.

The slow rolls of drums, the synths and the laser, Bernard's melodica and Hooky's dramatic bassline plus Martin Hannett's production (the reverb making it sound like it was recorded in a vast empty church), make it an uneasy listen at the best of times, a grimly beautiful song. The song was written (as was Ceremony) by Joy Division and recorded by them and then re- recorded by New Order in 1980 as their first single.

In A Lonely Place

New Order's first  steps into the world of performing were tentative and uncertain, the band visibly displaying the stresses and strains playing live brought. Gillian learning to play the songs and finding a space in the group, the increasing reliance on unreliable equipment, Bernard's discomfort with singing and being in the centre of the stage and an audience who in some cases came out of ghoulish curiosity and in some cases came because they wanted to see Joy Division. In 1982 they were filmed playing In A Lonely Place at BBC Riverside in London.

At nearly six minutes this is a longer version than the single and the song has clearly become a lament for their departed friend. Stephen is the key, the drums at the centre of the song while Hooky plays the cymbals. Bernard's vocal is drenched in echo and he looks like he'd rather be anywhere else. Gillian's keyboards and the melodica add the colour- if the various shades of grey this song contains can be described as colour. It is a superb rendition, taut and emotional and intense. When Bernard steps out of the spotlight to play the synth, turning his back on the audience, there is a gap in the middle of the stage- a gap they still haven't really worked out how to fill. As it approaches its end, with the song still playing Bernard walks off stage and the rest then follow. I have an internet friend who saw New Order perform the song in London around this time and he says that when Bernard sang the 'How I wish you were here with me now', his eyes looked to the ceiling and members of the audience gulped and wiped their eyes.

By 1984 New Order were established, two albums in and with tours and gigs behind them, confident and bolshie and with a pioneering sound, rock and dance fused, Joy Division's basslines and the electro of clubs in early 80s New York and Berlin making something new- the rousing, sensational rush of Temptation, the dance dynamics of Everything's Gone Green, the life affirming day- glo colours of Age Of Consent. The story of their performance at the Radio One studios in summer 1984 has been told before. The group played a gig in Cornwall the night before and assumed that a cross country dash to London would be no problem. It was- bank holiday traffic and stinking hangovers combining to produce a grumpy band arriving at the BBC. The studio wasn't to their liking and all their temperamental synths and machines had to be set up in the summer heat. Bernard in particular is in a foul mood. Both Hooky's and Stephen's autobiographies are pretty candid about the drug use within the group by this point and when watching the four songs played that day, it's looks like at least one member of the group, the one in the short shorts and vest, has guzzled a significant quantity of cocaine.

In A Lonely Place is a strange choice for a live Radio One session when they had a good number of songs to choose from by this point but it seems typically New Order to play it. As Stephen begins the song, rolling his sticks round the drum kit, at what is the correct tempo, Bernard screws his eyes up at the mic and snarls 'faster, Steve, FASTER'. The song progresses to a pace Bernard is happier with. At one point Hooky shoots his school friend a foul look. Bernard wipes his nose with the back of his hand, again admonishing Stephen to play faster. It is the grumpiest performance of a Joy Division song you'll see. You might feel that it undercuts the funereal majesty of the original recording and the otherworldly quality of the version at BBC Riverside but that's New Order for you, certainly the 1980s incarnation of the group.

Hooky's amp, if you want another Andrew Weatherall connection, is sprayed with the words Gay Sperm. On the 1998 Two Lone Swordsmen mini- album A Bag Of Blue Sparks there was a song called Gay Spunk- I'm guessing one led to the other. Hooky had a habit of spraying messages on his amp- Salford Rules was a common one. In 2007 as he played what would turn out to be his last gigs as New order's bass player, over four consecutive nights he sprayed the words 'Two Little Boys' , then 'Formed  A Band', followed by /'They Fell Out', and finally 'The End'.

I watched that studio performance live on TV. It was so New Order. A 30 minute slot on national TV and radio (I think) and they just didn't want to be there and were all over the place.
'An atmospheric song in an unatmostpheric place' was the intro to Temptation.

The other songs in the session are equally bad tempered and taken at breakneck speed, Age Of Consent especially so (a song that is already pretty fast). There's also a constant threat of little Bernard popping out of those shorts to make an appearance.

Yeah, that 1984 session does nothing to improve, my already pretty negative, impression of Barney.