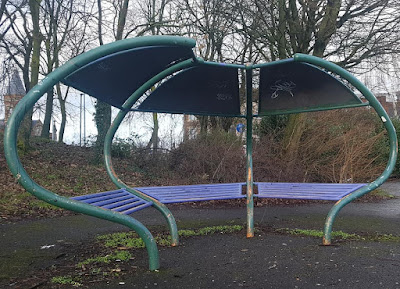 One of my favourite albums of 2020 came out right at the end of the year, released by the Dutch label Music From Memory, a triple vinyl compilation called Virtual Dreams (Ambient Explorations In The House And Techno Age, 1993- 1997). It is a beautifully packaged release and the music within the six sides is beautiful too, slow motion, transporting, ever so slightly trippy, trancey, machine music infused with human emotions. Many of the artists on the album made club music, high tempo, high octane dance records but would also slow the tempo for a B-side, cuts for home listening and the inevitable comedown. The track selection and running order are superb and it sounds like one cohesive album, almost as if these tracks from twenty- five to thirty years ago were designed to end up next to each other in in the next century.

I bought the album based on a review by Robert Harris (Dr Rob) at his Ban Ban Ton Ton blog in November. It's here. Be warned- I read Rob's piece and went straight to purchase. Some of the artists may be known- Richard H. Kirk of Cabaret Voltaire appears as do fellow Sheffield bleep pioneers LFO and The Primitive Painter was a 90s vehicle for Roman Flugel but many of the names are only dimly familiar. MLO, Pulusha, Spacetime Continuum, LA Synthesis, Bedouin Ascent. The full tracklist is here. This one, Rainful Memories by by MDA Analog, is only on the digital release. The combination of the sound of rain falling, the children's voices and the washes of synth is like having a warm bath in analogue sound.

Virtual Dreams is completely in tune with what I've been listening to for the last year. I realised it also has some crossover with the 1993 mix by Andrew Weatherall, the so- called Massive Mellow Mix (real name Sabresonic Slow Electric Vol. 1) which I wrote about here. The name that crosses both is The Primitive Painter and handily their 1994 album has also had a recent re- issue (by Dutch label Apollo/ R&S). Roman Flugel and Jorn Elling Wuttke grew up in Frankfurt and hearing the sounds coming out of the UK on labels like Warp and out of Detroit on ones like Transmat they made an album of 'gauzy, melodious electronic'. The Primitive Painter took their name from Felt and declared themselves to be children of C86, inspired by the DIY attitudes of Felt, The Jesus And Mary Chain and the C86 bands. This track, Cathedral, sounds nothing like The Pastels or Primal Scream but having had a burst of C86 at this blog and others recently everything seems to be coming together nicely. This is ten minutes of gorgeous, hypnotising sound. You can buy the album here.

Just back from a quick wander through the snow covered streets. First day off in a while and this is a nice way to start it.