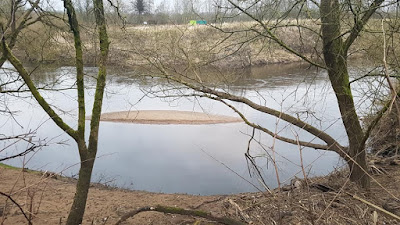 Richard Norris' Elements album was one of last year's highlights, five tracks of analogue synths, pulsing rhythms and washes of sounds, widescreen ambient music that forced its way into your foreground.

Water, with a haunting vocal by Bishi Bhattacharya, has recently been released in several new forms. This version is a remix by Richard himself, driven by a rattling, echo-laden breakbeat and sounding like it's come from the very distant past and the present at the same time, Neolithic acid ambience.

This is the fifteen minute extended instrumental version, a superb version which unfolds very slowly, rippling piano melodies, gentle drones, the sound of water lapping on a shore, long synth sounds, all the time in the world.
There are also remixes by Kams, Pulselovers, Dohnavur and Kieran Mahon. Every remixer makes something new out of the original, finding new ways into the track and taking it somewhere else. The whole pack is at Bandcamp where you can also sign up to Inner mind, Richard's new subscription club which will bring forth all sorts of new music and monthly treats.
Posted by Swiss Adam at 08:00

The instrumental version is sumptuous.

The whole package is great, Kams remix is very good. Have to say that the subscription package is really living up to it's potential so far