You Don't Change Or I Don't Notice You Changing 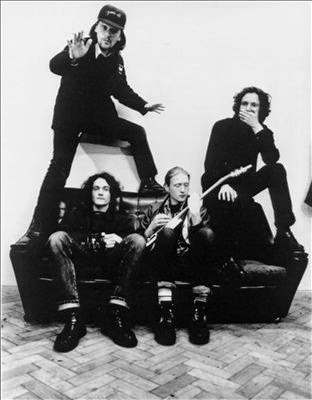 I'm not going to move on from this little Alex Chilton inspired run without mentioning Teenage Fanclub. When Bandwagonesque came out in 1991 music journalists were falling over themselves to praise it and then the really clever ones started saying they were just ripping off Big Star. Which led to a thousand indie kids beating a path to the record shop to buy Big Star records. I always thought they sounded as much like Neil Young and Crazy Horse, or a slightly mellower Scottish Dinosaur Jr as much as Big Star. But anyway, Teenage Fanclub have many wonderful songs. I was going to post God Knows It's True but JC did that recently at the Vinyl Villain so I'll go with Everything Flows from A Catholic Education instead. The ramshackleness of their early days is a joy to behold. In this song they also nailed a pretty specific feeling in the lyrics.

Everything Flows
Posted by Swiss Adam at 08:00

I may have said this before, but at a gig on the 'Songs from Northern Britain' tour, the band omitted at least 8 or 9 songs I really hoped they'd play and yet there still wasn't a weak moment in the set. The consistent quality of their songwriting is staggering.

Everything Flows...ah the moment about halfway through the solo when the whole song seems to take off. One of my all time absolute favourite musical moments by anybody ever. I like the rest of their works well enough, but that one moment means I'm always disappointed with everything else of theirs.

I don't think they sound that much like Big Star to be hohest. Dinosaur JR on that first album is a far more accurate description. This is a bit like a half asleep Freak Scene isn't it. Which is another bloody great guitar solo. I'm not one much given to geetar solos, but that one does the trick good and proper.