Want To Join In A Chorus? 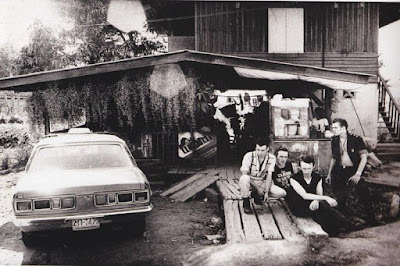 The Clash, day five. I've tried to avoid the obvious songs but for today I'm going with one of their best songs and a high point of the later years. In Straight To Hell Joe delivers a state of the world address, taking in Thatcherism, industrial decline, unemployment and racism in verse one, abandoned children, cultural imperialism and the Vietnam War in verse two and the lives of immigrants universally in verse three. Mick comes up with the guitar hook and Topper thumps out a sort of Bossa Nova with a lemonade bottle with a towel wrapped around it banged against the bass drum. This is the longer version which was edited down for Combat Rock, complete with extra lyrics- at seven minutes long it is possibly Joe's finest hour lyrically and vocally. From the Sound System remasters, this is the version you want/need.

Love this, probably after White Man this is my favourite Clash song

Mine too. And as I've lived in Thailand for the past 20 years, this song resonates with me. Thanks for posting.

Yup. One of their finest songs by a long long way. Also availableob the 'Clash on Brodway' boxset.

Straight To Hell is a defining moment for Joe Strummer, even as the sun was setting on The Clash. That's not to take anything away from the performance of the band, including (Tymon Dogg's ?) eerie, Far Eastern (is that a PC term?) violin work and Topper's instincts on percussion. The line "there ain't no need for ya..." has always struck me as Joe sings it with such resignation.

These few posts have made this old Clash fan listen to familiar songs with fresh ears. There's no higher praise I can offer.