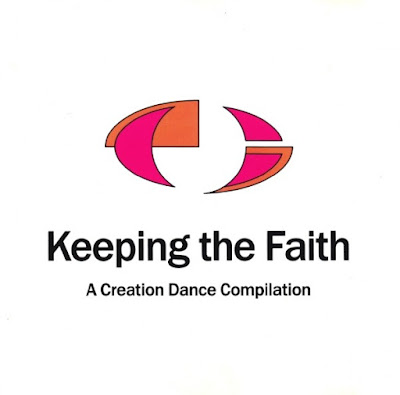 I was having a conversation online recently about the wonders of the Various Artists compilation album, which at certain times has been a real work of art. There are others I could go on about at some length but these are the three that immediately come to mind, all released within a few years of each other (and all tied together as well).

I've written before about Creation Records 1991 dance/house compilation Keeping The Faith but it is a perfect example, a well put together round up of similar minded artists and tracks defining a moment in time. From the opening minutes where Fluke take off on a Pan Am to Philly through to Hypnotone, a pair of Primal Scream remixes, Weatherall's definitive remix of My Bloody Valentine, Love Corporation, J.B.C., Sheer Taft, Danny Rampling's The Sound Of Shoom and World Unite here isn't a duff track and it is full of great moments. The Tears For Fears sample in J.B.C.'s cover of We Love You sums up how far Creation Records have shifted in 1991- 'dj's the man you love the most'. World Unite by World Unite is a majestic ambient house dub excursion- bubbling synths, up vocals with an eye on the dancefloor. The only thing I know about World Unite is that it was written by Potter and Stacey. And I love it still. 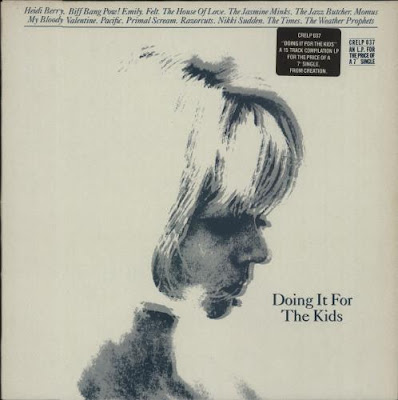 In the mid-to-late 80s Creation excelled at budget compilations, often a way to keep the wolf from the door and keep the cash coming in. At a knock down price of £1.99 1988's Doing It For The Kids was an essential purchase- The Jasmine Minks, Felt, Primal Scream (early indie version), The Weather Prophets (their song Well Done Sonny is below), The House Of Love, The Jazz Butcher, Biff Bang Pow!, My Bloody Valentine, Momus, The Times, Nikki Sudden, Pacific, Heidi Berry, Emily, Razorcuts. It is almost the complete picture of post-Smiths indie. And completely untouched by what was already brewing that would lead to Keeping The Faith. A snapshot of a time. 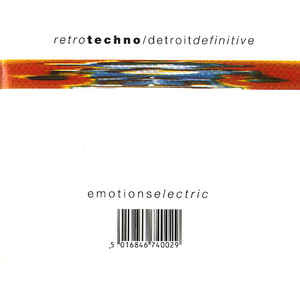 The last one is this one, Retro Techno/Detroit Definitive Emotions Electric, a 1991 double album of the futuristic sounds of Detroit, a pulling together of the work of Juan Atkins, Kevin Saunderson and Derrick May, wall to wall techno classics that still sounds like its ahead of everyone else. From Model 500 at the start of Disc 1 Side 1 through to the massive drums, rhythms and bleeps of  The Groove That Won't Stop, this is better than most 'proper' albums. The closing track is a sublime version one of dance music's set texts, the unreleased mix of Strings Of Life by Rhythim Is Rhythim.

This could become a series I fear. Feel free to chip in with your own suggestions.
Posted by Swiss Adam at 08:00

The first one to spring to mind is JBO, a Perspective , a complete work of artwork and vinyl box. However the inclusion of the Irish band has always irked me.

Oh and the two Headz compilations on Mo Wax which ai wake up screaming about sometimes when I remember selling with most of the first 25 Mo Wax releases to fund the purchase of my first iPod.

The Junior Boys Own Colle tion is another one of my favourites, the one with the Brown cigarette cards in the cover.
Swiss Adam

Glad you posted this after our chat Adam! 'Keeping the Faith' is of its time, but still totally holds up. Agree with Drew re: the Mo Wax comps. Other strong showings include: 'From Brussels with Love' on Les Disques du Crepuscule; 'Lonely is an Eyesore' on 4AD; 'Back to Breaks' on Harmless and the 'DJ Food presents Jazz Breaks' series on Ninja Tunes. Any other suggestions welcome...

The first SOMA compilation, you will be pushed to find a better collection of quality Recordings

And... The first ambient Apollo compilation too.

Great idea for a series. I have fond memories of 'Doing it For the Kids'. I've got a couple of boxes of comps downstairs - David Holmes' 'Essential Mix 98/01' springs to mind as one I played to death.

As a kid I grew up on budget compilation albums - the Lost Leader Series from Warner Brother Records was always a great catch. The morphed that into a compilation call Troublemakers in 1980 which included tracks from Marianne Faithfull, Sex Pistols, PiL, The Modern Lovers, Gang Of Four, Wire and The Buggles over two discs! It is always the first VA Compilation that comes to mind.
Second is Rough Trade's unmatchable Wanna Buy A Bridge? compilation which featured Cabaret Voltaire, Gang Of Four, Stiff Little Fingers, Raincoats, Young Marble Giants, Scritti Politti and Delta 5. This album opened my eyes as much as it opened my ears and mind.
#3 has to be the Creation compilation you reference above - Doing It For The Kids! It is a such a great representation of what Creation was about and what they were trying to accomplish. The Nikki Sudden, Momus and Felt tracks have stuck with me since the first time I heard them.

Can't forget the two volumes of Casino Classics, most Scooterists of my age group's introduction to the genre and also the Big Wheels of Motown. Then there were all of the Goldmine comps that came out n the late 90s early 2000s. I was giving this much thought whilst taking the scooter into the town today. A glorious day up here.

Just mentioned exactly these kind of comps as what we Yanks lived on in the 80's when JC posted a bit about Hangmans Beautiful Daughters a couple of days ago. We had no access to this music otherwise. Well, I guess the rich kids did. Thanks for the memories (again).

Yes to the Big Wheels of Motown comps plus Reggae/Motown Chartbusters. And those Volume cds were excellent.
Swiss Adam

I did a short series on compilation CDs over at the old blog...I'm sure I gave a mention to 'Doing It For The Kids' while I'm also a bit of a sucker for Happy Daze Vol.1 that tried to fuse the indie/dance thing that was going on circa 1990.