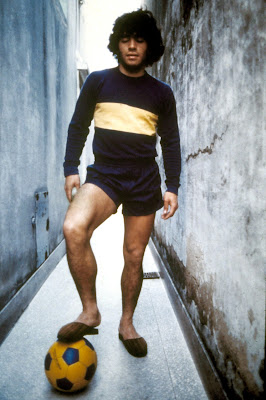 I love this picture of Diego Maradona in his Boca Juniors shirt and carpet slippers. I saw Diego Maradona play once. In the 1983-4 season United drew Barcelona in the quarter-finals of the European Cup Winner's Cup. Away in the first leg United came home two-nil  down, centre back Graham Hogg diverting the ball into his own net right at the end of the game. Two weeks later Barca came to Old Trafford for a match that still stands out for me as the best game I've ever attended. We didn't have much hope of going through. Two-nil down,a Barca away goal would finish us. As well as Maradona, then ascending to 'best player in the world' status, they had mop-haired midfield maestro Bernd Schuster in their side as well. Old Trafford was crammed to the rafters, Maradona barely got a kick and Frank Stapleton and Bryan Robson scored the three goals that sent us through to the semis (a tie against Juventus, who had a team containing Boniek, Platini and Rossi amongst others. Another amazing night at the football, from when European nights were a rarity rather than an expectation). Robson left the pitch on the shoulders of the thousands of fans who poured onto the pitch at the final whistle. Not me, as my brother frequently reminds me. I didn't want to get clobbered by a copper. At the Juventus game a copper threatened to break my arm if I tried to walk down a certain gangway again. Friendly chaps the GMP.

None of which has anything to do with this song I found recently. It's one of those deeply clubby chuggers, Love From Outer Space style jobs. Very good. May wear the carpet out if played late at night in subdued lighting through some decent speakers. Headman featuring Scott Fraser and Douglas McCarthy remixed by Hardway Bros.

Never forget Barry Davies saying "You have to say that's remarkable" after he scored THAT goal against England.

Bastard. Think he was better than Pele.

The Hand of God!

I remember my Aboriginal cousin idolising him...and using him as a convenient excuse to do drugs.

Don't know if somewhere like Alice Springs had their own music scene circa 1990? but it could've been a line from a cork-swinging floppy-hatted song.

My Maradona Barcelona time came whilst on hols in Spain about a year before. The 'Butcher of Bilbao' (Burrachega) broke Diego's leg. How the 3 Englishmen in the 100,000 crowd smiled as the leather pouch of cheap red wine was passed around. Tis funny, I recall Schuster being hailed as the main man by the Catalan faithful.