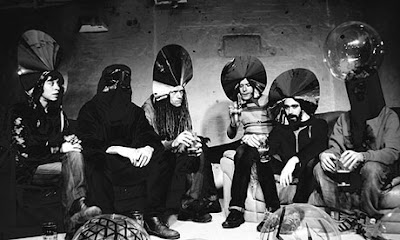 I don't know what they've been drinking in Salford recently but there's some strange things brewing across the Irwell. Drew tipped me off to Gnod a little while back. This song is one of the shorter ones of their new lp Chaudelande, being a mere eight minutes long. Starting with some finger cymbals and chanting, just to disconcert you a little, it then settles into a crunching groove with thumping drums and a cranked up guitar. Occasionally some extremely distorted, crackly vocals appear and then disappear. Towards the end they raise it up a notch, shift gear and proceed towards the finale. The wah-wah pedal takes a battering. I'm picturing Salfordian noise-monks playing at a Julian Cope gig somewhere remote, with an audience locked in a barn, transfixed by the pummeling the instruments are getting. Although the truth may be a little crustier. See for yourself. And then shell out for the album.

Well that's just made me 9 minutes and 33 seconds late for work. Worth it though I feel.

They are good aren't they.

If you like this Artog check out the Cosmic Dead, Weegie Kraut/Space rock.

A whole album feels like a bit of a toil at times but they are very good.

Yes it's very good. Sounds like they ate too much magic mushrooms. Far out.