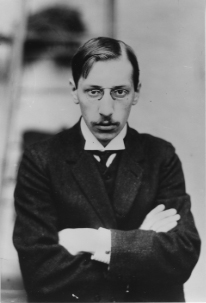 Pushing the boundaries of this blog a little bit further than usual, this evening is the 100th anniversary of the first performance of Stravinsky's Le Sacre Du Printemps (The Rites Of Spring). Now this is some way outside my area of expertise but let's consider the facts- this was a piece of music that deliberately set out to shock, has multiple layered patterns, polyrhythmic whatnots, pounding drums, invented a completely new strand of modern music, has been described as cubism set to music, is supposed to be played while people dance, and on its debut led to audience members fighting with each other and riots between conservatives and modernists. Take that Primal Scream.

I've no idea whether this 2010 performance is a good one or not and obviously footage and bootlegs of the original 1913 performance are hard to come by. If anyone knows of any superior versions please let me know. But as one Youtube commenter says 'God damn. Stravinsky always leaves me wondering whether I want to fuck or go blind'.

I can rememeber hearing this courtesy of a 'liberal' music teacher when I was a lad and having all of my ideas of what 'classical' music was supposed to be like very constructively blown away.

Good on you, Igor. And teachers.

Never knew it caused such a reaction--wow.