Our Band Could Be Your Life 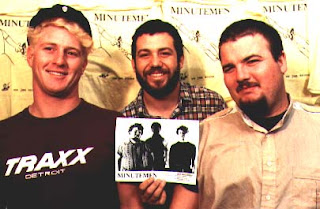 I'd forgotten until recently how much I love The Minutemen-  three unlikely looking punkers from San Pedro, California who made several classic mid-80s indie-punk albums for SST. Although Minutemen are more of a band inspired by punk than sounding like punk. They were fired up by punk's DIY attitude and sense of freedom and personal political responsibility but weren't Sex Pistols copyists or three chord trickists. Instead they played very short, quite fast, agit-folk-punk with a bit of funk on the side. On their 1984 double lp Double Nickels On the Dime they released 43 songs, none much over two minutes long. This one tells their story and is just about perfect.

From an earlier lp (Buzz Or Howl Under The Influence Of Heat) comes this intricate beauty, loads of ascending and descending, criss-crossing guitar and basslines, working up to the one line chorus- 'little man with a gun in his hand'. If you don't like this, I'm not sure there is any hope for you.

Little Man With A Gun In His Hand

And from the magnificent documentary We Jam Econo, History Lesson Part II live, acoustic and stripped down, with some chat from Mike Watt in the van first. D Boon, singer and guitarist, died in a car accident in 1985. I don't think Mike Watt has ever gotten over it.

Minutemen were also hidden in the deepest corner of my memories. I swept away the dust from my old record and listen to 'Double Nickel' while I write this words. And for sure: Mike Watt did not get over the death of D Boon yet.
Have a nice weekend SA

Great bass player, I've seen him play with The Stooges twice now, solid as anything.

Watt made a rock opera album called 'contemplating the engine room' in '97 explaining his sense of loss. An incredible record.

In a bizarre set of chance encounters and counter encounters we had watt to stay here in my house for 3 nights in 2004 when he came over for the centenary celebrations of Ulysses in Dublin. Fascinating man. Wakes very early though.

yes it was really cool. the jam econo - thing is his philosophy that you should save money no matter what your doing. including taking a trip to another country when offered a floor to kip on. like having yr mate from college over only he went through the whole SST/west coast punk thing. he's a genius by the way -knows every subject there is back to front. I tried to do the Ulysses walk which I thought i knew quite well only to find him ruminating at length at some dublins roughest corners. he tends to bellow as well cos of partial deafness with a touch of lunacy thrown in. I had to scuttle him along as we traipsed around dublin (for 11 bleedin hours!!)

Its comments like that that make this worthwhile Anto.

Guessing that you're knowingly quoting the title of the Michael Azerad book for the title of the post (some coincidence if not). A great book, well worth a read if anybody hasn't, the chapter on the Butthole Surfers makes me cry with laughter almost every time. Fantastic tale about Mike Watt too, he's seen a few things that lad.

I just re-read the Minutemen chapter this weekend since going back to them. It is a great book. Will have to re-read Buttholes chapter now following your comment.