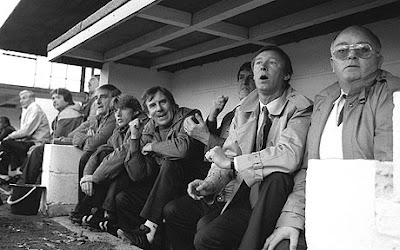 I was 16 years old when Alex Ferguson arrived at Manchester United. I'm 43 in eleven days time. He's managed the club I support all my adult life. What's more I was a regular at Old Trafford throughout the Ron Atkinson years and Ferguson's early days and remember what it was like before we were 'the biggest football club in the world' TM. It seems inconceivable that he won't be there. But then again, let's not get carried away- no one's died, it's only a game. Nothing lasts forever.

What digs at me though is that without him there (and soon the last of the old guard- Giggs, Scholes- will be gone too) is that within three years United will be just another rich, big club playing the Euromoneyball, three year cycle, managerial-merry-go-round, the same as all the rest. I know some of you won't give a fuck either way. I know that for some of you there are less rewarding ways to spend money watching football (hello Airdrie, hello York City). Although maybe that isn't less rewarding- I dunno. Yes, we have been spoilt. Yes, it is all over now. Let's see what happens next.

I'm totally not into football, but I appreciate your team is your team. Even if they are dead good and win all the time.

I'm not Ferguson's greatest fan, if push came to shove my English team would be Liverpool but I admire what he did and it is the end of an era.

Get yourself to the lower leagues, you don't feel as ripped off and winning a game is reward enough.

Apparently when he was at Rangers he went storming into the managers office demanding to know why he was in the 2nd Team."Because we don't have a 3rd team" the manager Scott Symon coolly replied

I agree to Drew and I have a big respect for SAF's lifetime. If I should choose an English team I would go for Aston Villa just because it was my first game I watched on English ground live.

European football is ruled by money and you can see the real games only in lower classes. I know what I'm talking about because it drives me mad, when I look to what them so called managers do to my team in Germany (Stuttgart). Although I wish all the best for your team.

@charity chic: Nice story - I should remember this sentence for work

£19 to watch Bury and we're skint.... My Wife is a Red (season ticket etc) and she actually cried today.

You've nailed it quite well, our kid.
The fuckwits on 'Moron Cabby FM' speak of 'it's like a bereavement in the family'. NO it fucking is not. He's 71 - and smart successful people retire every day. His many top-of-the-tree admirable qualities should not obscure his grumpy frailties and miserable fractious one-dimensional tenement funster bullying. (Many a ref will be raising a silent toast tonight).

Like most of us, he was nay but 5 minutes from oblivion. Ah yes .. Lady Luck. But for that out-of-play Robins 'goal' v Forest in the FA Cup, a hundred years ago when our SA was ne'er but a pink apple-cheeked cherubic sprog, he'd have found himself upon the ever-growing pile of coaching has-beens.

Weep not too long - as His legacy is as big .. as His bank account.

I was convinced it was going to be Mourinho - what with him and Fergie being drinking buddies and all - which should have given me nightmares as a Chelsea fan but the thought of it sort of made me chuckle. I'm kind of glad we got off the Jose circus, the man is exhausting.

Think you're about to get back on

I was surprised when Tommy Brown didn't get the gig. Looking after players like Johnny X, Billy Thompson and Mick Hucknall (out of Simply Red) takes great management skills; not least as one of those is invisible and the other a fish.