My Favourite Way Of Getting Kicks 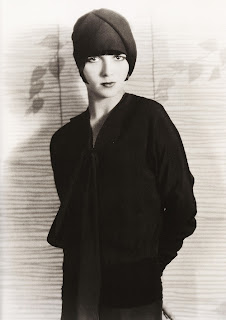 There's a grebo reunion package tour about to do the rounds- Jesus Jones, The Wonderstuff and Pop Will Eat Itself. Steady, don't rush off to Ticketmaster all at once. If Jesus Jones were playing in our back garden I'd pull the blinds down and turn up the TV, and The Wonderstuff would probably turn the bar into a giant magnet but I'd quite enjoy PWEI. I saw them in my first term as a student at Liverpool University and they were dead good fun. I'm sure I'm not the only one who didn't know Beaver Patrol was a cover until much later as well (Shadows Of Knight, 60s nugget band). Beaver Patrol is of course infantile, purile and sexist. At the gig, autumn '88, I was talking to a grebo girl I quite fancied. I was wearing a bandanna (around my head) and a white shirt with a waistcoat. Thought I was cutting quite a dash. I only realised later that several times I'd referred to PWEI's Clint as Clive. Although maybe it was the bandanna that damaged my chances more.

Labels: louise brooks, pop will eat itself, shadows of knight

"Beaver Patrol is of course infantile, purile and sexist" but it is w=quite good

It is- infantile, purile, sexist and quite good.

loved all 3 bands. And I guess I still do

Like the first Wonderstuuf lp but went off them quite quickly- Size of a Cow was very annoying. As were Miles Hunt's enormous jeans.

I’m the proud owner of at least one album by all three bands mentioned here, but I don’t know if I’ll ever forgive PWEI their ‘Cicciolina for Italia’ chant. The oddest thing about this post is that it made me rush to one of the oddest records in my collection, ’76 Kids Forever’ by Sudden Sway, for their song ‘Only A Grebo’. Odd.

Never mind the usual arty photo of a model, we want one of you wearing a bandana, white shirt and waistcoat.
(What is grebo?)

I used to teach Miles Hunt's cousin, Will, when at North Bromsgrove High School.

No such photo exists George. Thankfully.

Thanks (grebo). I bet a photo exists, you're just too embarrassed....

i'm stunned that George is the only one to pick up on yr bandana faux pas. i can only take it that it was a shared fashion blunder that we all made. I once wore one every day on a Greek island holiday and demanded that snaps were taken of me, profile only with the blue sky in't background. i was heavily under the influence of that floatation vibe that Davy posted of recently. That and Dublins finest Yellow Sunshine. Jesus ..its all coming back.

I loved Circlesquare (paranoid mix in particular). Didn't much care for them after that, especially when Miles went off to MTV and the Bass Thing died.

stx- is that you?

For those who don't know him, stx did the classic audio.out blog, the first music blog I ever went on. Looking for Weatherall stuff (natch).

IIRC, Clint's actual given name was Cliff. After Cliff Richard.

Audio.out! I have read great things about stx mainly at Acid Ted, but I was too late to catch him in full flight. It would be great to see him back.