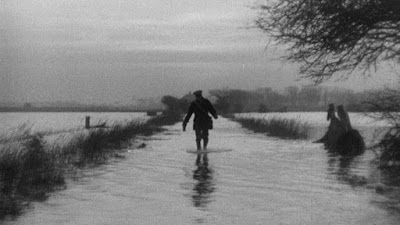 Brexit Day 2 comes today and we're still in the European Union. We may leave on May 22nd or June 30th or October 31st or possibly the 32nd of never. I've had to back off from the news and the articles recently. I don't think it's been good for my health, the constant drip-drip-drip of idiocy, the voxpops that tell us nothing and the self-styled 'hard men of Brexit'.

I watched a film on BBC 4 recently, Arcadia by Paul Wright. Constructed entirely from archive footage from the BFI, local news reports and found footage, Arcadia is a deep dive into an older and weirder country, the strangeness of rural Britain in an hallucinatory collage, stitched together in a flood of images of folk (in both senses of the word folk), almost a remix of social history- 1920s nudists, postmen wading in streams, ravers, English Civil War re-enactors, Maypoles and Morris dancers, young men in tweed suits cavorting outside thatched pubs, a woman with her pet poodle which she has had stuffed, pagans, Stonehenge, foxhunting, men fighting in the village streets over a football, cheese rolling in Gloucestershire- all these and more, in a rush of the past. This clip gives a glimpse into it but really you need to see the whole thing. I'm not sure what, if anything, this has to do with Brexit but it's a good counterpoint to all the noise coming out of Westminster.

The soundtrack is incredible as well, starting out with the cut glass voice of folk singer Anne Briggs and then working through analogue synth sounds, strings, glam rock's stomp, punk's fuzz guitars, some snatches of acid house and ending with a synth version of Jerusalem, courtesy of Will Gregory of Goldfrapp and Adrian Utley of Portishead. Buy it here.

Totally with you on this SA, my most recent post is about the same film and I'm in love with it! Watched it twice and now have the DVD. Everyone should see it and let it take them into its weird, eccentric, often dark but at the same time very familiar Britain. Superb soundtrack too, as you say.

It's a very good documentary but as an Irishman it's ever so slightly alien.

C- I missed your post about Arcadia, have just read it- much better than mine.