Way To The Show 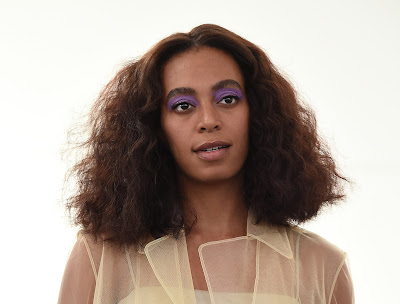 Solange, Beyonce's younger sister, has an album out called When I Get Home, that is beginning to sink into my consciousness. It is definitely based in modern r'n'b but has some psychedelic soul and woozy, cosmic, jazz angles, a set of songs that are short and sketchy and which flow by in a dreamlike state, lines of vocal repeated, Moog riffs, choruses that sort of flutter about, Stevie Wonder-esque Fender Rhodes piano parts, songs about politics and identity and strange shifts in tone- but it all hangs together and despite looking like a long slog when viewed through the nineteen song track list, the album doesn't feel like it at all. Invigorating and inventive and requiring some attention but also likely to still be being played in months to come. This one keeps me clicking back to the start.

I was chatting with a friend about this album the other day and came up with Left Field R&B as the best way to describe it. The guitar stabs on Way To The Show - on their own - make When I Get Home essential listening in my book.

I can't get used to an album being released in no physical format- shows my age I guess.

It is coming out on vinyl soon