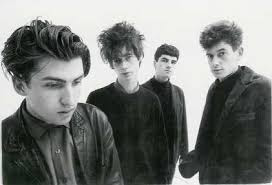 East Village were a late 80s indie band, 60s inspired with three singers/frontmen. Drew introduced me to them five years ago and they recently popped up at the Manchester Rave On blog (link down there to the right) which prompted me to give them a spin again. They split up in 1991 and subsequently Heavenly put out an album called Drop Out, a compilation of their various singles that opens with this song...

... and a very nice piece of indie guitar pop it is too, adding value to your Wednesday morning. Drop Out is well worth picking up if you see it anywhere at a reasonable price. Their vinyl goes for silly money second hand and the CD re-issue of Drop Out is now expensive too- cult status does that to a band.

All three men have been involved in Heavenly Records in some way since the group split, Paul Kelly touring as part of St Etienne's band in the 90s and then as a film maker (Finisterre, Lawrence of Belgravia, Dexys: Nowhere Is Home) and brother Martin in Heavenly's publishing company and films. Spencer Smith worked for the label too.

Big fan too. I belong to a 7" subscription series presented by Optic Nerve Recordings. All of the dozen releases are indie singles from yesteryear. A few months back I got Cubans In The Bluefields from East Village. What a beauty to see and hear. I can't stress enough what a wonderful job the label has done with these singles so far. Here are the details:

Thanks Brian, will check that link out.