One Hundred Years From Now 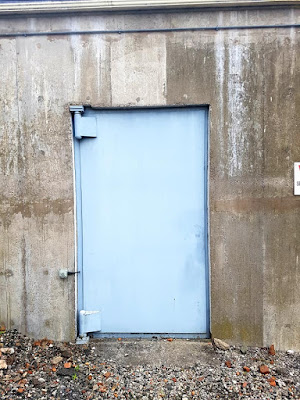 This week's pictures all come from a visit to Hack Green 'secret' nuclear bunker, a Cold War concrete box and bunker in Cheshire from where regional government would take place in the event of a nuclear war. The Cold War officially ended in 1989 following an agreement and announcement from Bush and Gorbachev. The USSR broke up in 1991, the USA won and everyone was happy. The bunker was already outdated at this point I suspect. The machinery and computer systems, dormitories, radio broadcast equipment and all the rest of the gear designed to administer the north west of England in a post- apocalyptic world look pre-1980s. The idea that much could happen from here to successfully help Britain survive an attack by the Soviet Union seems ridiculous (in the same way that the rockets and modules that took three men to the moon fifty years ago look like tin cans held together by the type of screws and nuts most of us have in our tool boxes- thankfully the moon equipment worked while the nuclear infrastructure never faced the test it was designed for).

The year before than the moon landings The Byrds switched from psychedelic rock to an older, gentler sound. The arrival of Gram Parsons in 1968 had pushed them in a solely country rock direction. Gram's appearance was the subject of some legal disputes and his lead vocals on several songs had to be re-recorded by Roger McGuinn and Chris Hillman. It's also been suggested that McGuinn was uncomfortable with giving over so many lead vocal slots to Parsons and wanted to re-establish the older Byrds as the key voices. Gram was still irate about this wiping of his voice and McGuinn's re-recordings in 1973 and who knows, if still alive today, he might still be unhappy about it- the Gram vocals have since been re-released on various box sets and extras. There aren't too many albums that can claim to have kick started an entire genre but Sweetheart Of The Rodeo is one- all country rock, alt- country and Americana can be traced back to the eleven songs contained within its grooves.

One Hundred Years From Now
Posted by Swiss Adam at 08:00