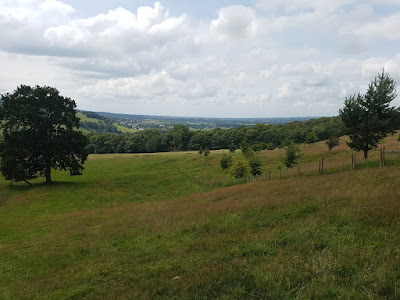 There will now be a break in transmissions for a fortnight while we head south to France for our summer holiday, the Atlantic coast for a week (near Royan, south of La Rochelle) and then a week in southern Brittany near Quimper. Static caravans this year, an upgrade from tents. I'm looking forward to the wine, the cheese, the sun and the heat, the sea, the sunsets, the slower pace of life. I'll also be less well connected to events back here so I'll miss Boris Johnson's ascension to the Tory throne and installation as Prime Minister. Since 2016 I keep thinking we've hit the bottom of the barrel but someone or something always comes along to keep scraping lower- Trump's outright racism recently a new low. I'm sure Johnson will provide us some further depths to tunnel. According to reports Jarvis Cocker finished his set at Blue Dot last weekend with his 2006 song Running The World, a song that keeps giving. Donald Trump, Boris Johnson, Nigel Farage, David Cameron, everyone in the European Research Group, the Conservative Party generally, the Murdoch press and anyone I've forgotten- this one is for you...

Ever since The Cure played Glastonbury I've been immersing myself in their back catalogue and this song has been a real earworm for me over the last few weeks. In 1990 The Cure released an album of remixes and extended mixes called Mixed Up, a double album and one that stands up very well still today. Lullaby was a big hit in 1989, fuelled by a claustrophobic Tim Pope video. The extended mix (done by Robert Smith and producer Chris Parry) fades in gently, a funky guitar part and a shuffly rhythm guiding us. Once the bassline hits the whole thing shimmies along, Smith's tale of dread and spidermen, taken to an outdoor disco, dancing under Mediterranean skies.

Anyway, that's yer lot for the moment, hope the weather holds up while we're away, play nicely, look after yourselves and each other and I'll see you in August.

Have a great time SA and drink some good French wine in situ for me. Not at all envious, nope siree, not one tiny bit.

Any room in your case for me? Have a splendid time SA.

Enjoy, enjoy, my friend - I just returned from Greece, could go back there again immediately!

Relax and enjoy your days in France. Have a great time

He did finish with that - his set was one of the best that weekend.