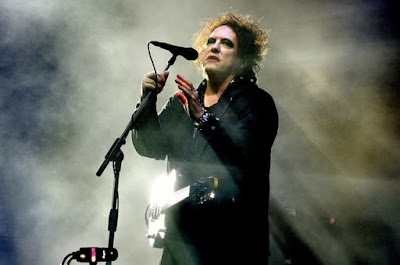 I was bowled over by the coverage of The Cure headlining Sunday night at Glastonbury. In the 80s I was an arm's length fan of the band- liked some the singles, dipped into the albums, eventually realised A Forest is one of the great post-punk records, spun around to Inbetween Days and Just Like Heaven, but I was never a knocked out fan. 80s tribalism played a part here, there's no denying it.

Watching bits of Glastonbury over the weekend presented some highlights- Johnny Marr reclaiming his Smiths songs, Billie Eilish lording it on Sunday afternoon, a seventeen year old with some serious confidence and attitude, Janelle Monae's showstopper and a Saturday night blitz from The Chemical Brothers. But The Cure on Sunday night were something else, two hours of perfectly pitched songs, balanced between wonderful guitar/synth pop songs and creeping post-punk dread. Robert Smith's voice has aged far better than most of his contemporaries and the group were spot on, Simon Gallup's bass playing especially so (I've often had him down as a Hooky copyist but he was a post-punk bassist in his own right on Sunday night). In front of a massive crowd with very few smoke and light show gimmicks they played song after song that seemed to connect in Somerset and definitely broke through the plasma screen. They peppered their set with the hits and paced it brilliantly- Pictures Of You was chucked in as the second song, my favourite three mentioned above were all played mid- set, an icy Play For Today and an intense and wired Shake Dog Shake. The encore would have been worth the price of admission to a Cure gig on its own- Lullaby, The Caterpillar, The Walk, Friday I'm In Love, Close To Me, Why Can't I Be You? and Boy's Don't Cry. Genuinely magical stuff and by a band who have done it more or less on their own terms, British post-punk, indie mavericks, surviving four decades and working their way in from the outside.

Pictures Of You
Posted by Swiss Adam at 08:00

Yup they were good and you are spot on about Robert Smith's voice still sounding as distinctive as ever.
I enjoyed Kylie as well!

Yes CC I enjoyed Kylie too. I found myself wishing that All The Lovers and Can't get you out of my head were more electronic and less polished studio session men though

Spot on about their performance and the 80's tribalism. Thank Christ most of us for over that.

As an American, I can't iPlayer any of it...very frustrating...but having seen them a few years outdoors in 3000 seater ampitheatre in MIami with The Twilight Sad opening, I am still confident in their ability to put on a show. Only Burn has made it on to YouTube so far, but DAMN it is STRONG!
I was impressed with what I've seen of Foals as well.

I'm sure it'll get onto YouTube soon enough Rich. I didn't see Goals but saw people on Twitter praising the drummer.