Uptown And Back Again 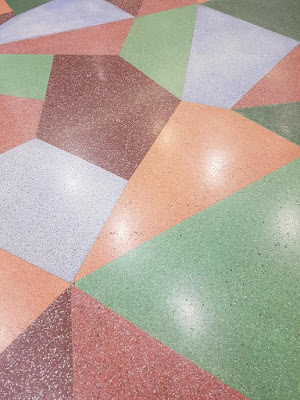 Monday's Uptown post led me to two further Andrew Weatherall remixes with Uptown in the title, this pair from 2016. Australian band Jagwar Ma's second album Every Now And Zen looked to the late 80s and early 90s for its inspiration, Manchester's neo- psychedelia and Screamadelica. They'd moved into studio space in Weatherall's Scrutton Street bunker complex and his influence must have seeped through the walls and open doors. He would remix the song Give Me A Reason twice, the first a slowed down, electronic dub excursion, the dull thud of the drum machine pushing it on for nine minutes. The second is a more abstract, even dubbier work out. A robot voice intones 'and left and right and left and right'. The  drum machine patters on.

Edit: the space Jagwar Ma's Jono moved into alongside Andrew Weatherall was not the Scrutton Street complex. I am more than happy to be corrected by those who were there.
Posted by Swiss Adam at 08:00

This wasn't meant to appear today. I messed up the posting dates.

Jagwar Ma didn't have a studio in Scrutton st , Mr W had moved out long before he and Jono shared a space .
The 'two heaters 'moniker was a in -joke between caretaker and client at the factory x

Thanks unknown. I stand corrected. That'll teach me to use the internet and my unreliable memory of interviews to as source material for blog posts.

One October morning Jono waltzed into work with a oil radiator under his arm ,obviously British weather didn't suit him .
He'd already installed one in his studio !.
Thus a legend was born x