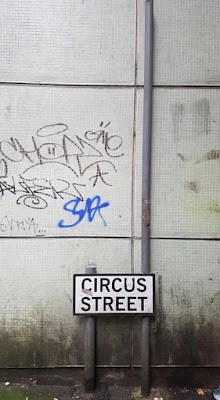 The number and sheer quality of Andrew Weatherall's remixes in 1990 is staggering, from Loaded (not to mention his production work on Screamadelica that was going on that year and the Jesse Jackson sampling, ten minute euphoria of Come Together) to a few lesser known remixes such as Word Of Mouth, Deep Joy and West India Company. Then there's the speaker rattling/ ghostly vocals brilliance of My Bloody Valentine's Soon, Jah Wobble (Bomba, twice), the massive siren laden reworking of Come Home by James, remixes of World In Motion, skanked out heavy beats for Meat Beat Manifesto, two long blissed out remixes of Floatation by The Grid, the debut release on Jeff Barrett's fledgling Heavenly Recordings (The World According to Sly And Lovechild... and Weatherall) and the dub magnificence of his version of Saint Etienne's Only Love Can Break Your Heart. For a man new to the recording studio its an incredible body of work. He was alos part of the Boy's Own collective that released at least one classic record that year, Raise which has his fingerprints all over it. Fired up by the spirit of the times Weatherall brought his ability to spot a sample in his extensive record collection and a lorryload of ideas about how someone else's record could sound.

Andrew Innes of Primal Scream had encouraged him to remix I'm Losing More Than I'll Ever Have and described his disappointment as the first version Weatherall delivered was just too tame. 'Fucking destroy it', Innes told him. That seems to have become the process- take someone else's record to pieces completely, keep an element from the original so the spirit of the song exists, but stretch it out and send it to clubland. In 1990 Andrew's technical expertise was limited and he relied on the studio nous and engineering skills of Hugo Nicolson, the man who turned Andrew's ideas into reality on tape.

In 1990 That Petrol Emotion were in the aftermath of a line up change. Founding member, guitarist/ ex- Undertone John O'Neill had left in 1988 amid some tension and drummer Ciaran McLoughlin and guitarist Raymond Gorman took over writing songs with American skate- punk frontman Steve Mack. Their 1988 album End Of The Millennium Psychosis Blues was a mixed bag but in some ways prefigured what was about to hit- dance influenced rock music, guitar riffs and sampling, half- sung half rapped vocals. By the time they recorded 1990's Chemicrazy they had Scott Litt on production and were sounding a little like R.E.M., more alt- rock than dance- rock. But in 1990 it made perfect sense for them to be remixed by Andrew Weatherall.

The remix of Abandon that was released alongside the body of work listed above was credited to Boy's Own, technically a Weatherall and Terry Farley remix but there are tales of one person being far more engaged with the project than the other. That Petrol Emotion were also suspicious at first, not sure that they wanted their song picked apart and re- assembled with a 1990 drum beat slung underneath. At least one member of the group, Gorman I think but possibly bassist Damian O'Neill, positioned himself in the studio to keep an eye on proceedings, to ensure that the guitars weren't removed completely and that it wasn't a sell out of some kind. Apparently as soon as Andrew queued up the sample that opens the remix of Abandon, the voice of Yabby You, the TPE man relaxed and knew everything was going to be alright. When the drums come in and then the low- slung bassline we're into the forefront of indie- dance, a genre Weatherall did as much as anyone to invent (and then run away from). The crunchy guitars and snatches of Steve Mack's vocals are tailor made for the dance floor at the Thursday night indie/ alternative night as much as for acid house. This being a 1990 Weatherall remix we're in for the long haul, seven minutes more or less, the guitars featuring more and more prominently as the song builds with a nicely distorted guitar solo at the end and that rhythm, the bass and drums, chugging away. It may not be the best remix he did that year but it also doesn't sound like any of the others- read the list at the top again and then play them back- to- back and you'll see the variety in Weatherall's work that year too. Those remixes do sound like the work of the same person (people I should say, Hugo was hugely important) but they don't sound like each other.

In sales terms none of this- remixes, crossover potential, Scott Litt, line up changes- worked for That Petrol Emotion. The album stalled at number 62 and Virgin dropped them. Andrew went up and up, Screamadelica and a further slew of remixes on his to- do list and then Sabresonic and Morning Dove White. His remix of Abandon is just one of an astonishing list of records he made that year, the only limit seemingly his imagination.

Ah nice to see you mention Andrew on here.

Haven't played that in ages. May end up doing a Weatherall related rabbit hole again tonight

Saw them in Belfast around that time, outstanding live and what a stunning remix

First gig I ever went to was TPE in Derry promoting Chemicrazy. For me it's an insanely good album that should have broke then worldwide. An absolute bloody shame. Andrew and Hugo did a great job of trying to make the record break with, respectively this remix, and the (for me) superior Hey Venus remix. We were spoiled to be honest.

This is an absolutely wondrous version of Abandon recorded at a soundcheck. https://youtu.be/OLNGPR61QBs