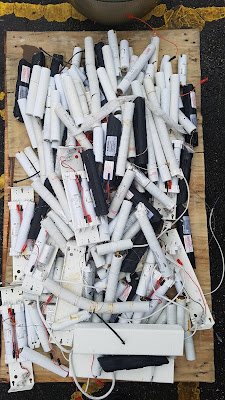 Around twenty years ago, before their mutation into The Double Gone Chapel and Wrong Meeting period where they fused electronic sounds with guitars, live drums and Andrew Weatherall singing, Two Lone Swordsmen were a solely electronic act and released a run of albums from The Fifth Mission through to Tiny Reminders, records that still reveal new things played today. The Fifth Mission is a progression across six sides of vinyl that encompasses a range of leftfield electronic sounds and styles. Stay Down is a record of short, deep sea, ambient/ dub- techno emissions. A Virus With Shoes experiments with a stoned, instrumental hip hop vibe. Tiny Reminders is a purist, triple vinyl, night bus ride into electro and abstract techno sounds.

The Swordsmen would also regularly turn in remixes for other artists. At this point, circa 1997- 2002, Weatherall was as far from the centre of attention as he ever got- the acid house days and the huge life affirming remixes that made his name long behind him, Sabres Of Paradise broken up and his natural tendency to avoid the bright lights, the big cheques, the greasy pole and the big names kicking in. Many of the remixes Weatherall and Keith Tenniswood did as Two Lone Swordsmen are uncommercial, single- minded transmissions from the underground, deliberately turned away from the light. In 1997 they remixed Texas, Sharleen Spiteri's pop rock band, who had just released a six times platinum selling album called White On Blonde. Texas were mainstream, centre ground, tasteful Radio One fare. It's a bit odd to think that someone somewhere decided that what the fourth single off the album needed was a pair of TLS remixes. Many of Weatherall's remixes over the years have been done for mates and sympathetic souls, or done as remix exchanges (TLS remixed Calexico and in return Calexico remixed TLS) or through long standing friendships such as Jeff Barratt at Heavenly (a long history of remixes of Heavenly artists from Sly And Lovechild, St Etienne and Flowered Up in 1990 to Doves and LCMDF in the late 00s to the more recent Heavenly artists like Confidence Man, audiobooks and Gwenno). In the case of Texas, multi- million selling major label artists, I'm assuming someone at Mercury thought it was a good idea and money changed hands. The result was a pair of overlooked and really very good, deep house and electro reworkings of the song.

The Breath Mix is the longer of the two, eight and a half minutes of minimal electronic sounds, led by fast, skippy drums and a line of Sharleen's vocal isolated and distorted. The injection of the deep bassline at around a minute is a blast and then the bleepy topline, sounding like it has washed up from the Stay Down sessions, dances over the top. Sharleen's disembodied voice continues to hang around, beamed in from another station. Very nice indeed and way too good to be buried on CD2 of an album's fourth single release/ vinyl promo.

Put Your Arms Around Me (Breath Mix)

The Electric For Bird Mix is shorter, only five and a half minutes, and a further deconstruction of the original song- Sharleen is chopped up even further, the beats are harder, the snares tougher and the bleeps less welcoming, with more static and distance. This remix eventually re- appeared on Two Lone Swordsmen's own remix compilation in 2004 sandwiched in between Six By Seven and Howie B.

Put Your Arms Around Me (Electric For Bird Mix)

Bizarrely given the staggering inflation in the cost of second hand vinyl with Andrew Weatherall's name on it, copies of Swordsmen Go To Texas can be picked up from Discogs currently for as little as thirty seven pence.

Have to admit, this hasn't been played much since 1997 when it was bought after one of those what the actual fuck moments

To my (admittedly) slight surprise, these sound really good. I always got the impression that Texas were desperate for a bit of credibility and maybe they thought a bit of, well, "hipness by association" might help...

Probably only listened to these remixes a couple of times, I'll have a listen this evening.

Truly great stuff. I'm really, really not a fan of Texas, but I went out and bought the CD single purely to get the TLS mixes and I wasn't disappointed. I'm not sure I've properly listened to any of the other mixes, but Weatherall and Tenniswood really deliver the goods here.

I'm not sure that I actually ever read this anywhere, but I always assumed the TLS/Texas connection was that Texas was co-founded by Johnny McElhone, who was originally in Altered Images, together with Jim McKinven, who was in One Dove, who were produced by Lord Sabre. Six degrees of Sabresonic, you might say.

Yes, that's a possibility Khayem, they could have been introduced to each other via One Dove.

Khayem beat me to it! I was going to bring up the McElhone/McKinven connection with Weatherall. I love Swordsmen Go To Texas, especially the Breath Mix. Texas is really only otherwise notable for White On Blond which in some ways sees McElhone finding his Pop genius once again.