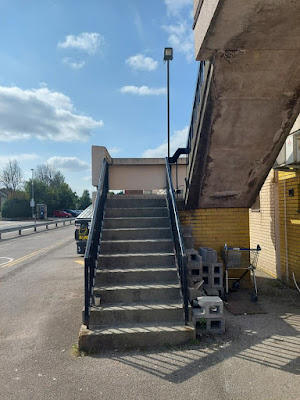 Just under a year ago I wrote a post about the then new Cabaret Voltaire album Shadow Of One and only last week I found my burned CD of it in the car and put it on a pile of albums to revisit. Shadow Of One saw Cabaret Voltaire reduced to the core of founder Richard H. Kirk, Stephen Mallinder having departed sometime before. Sadly news started to come out of Sheffield the day before yesterday that Richard had died aged 65.

Cabaret Voltaire's influence and presence in the shadows and half light since the mid- 70s (pre- punk) as electronic/ sampling/ sound mangling/ industrial pioneers is immense. Kirk once said that electronic music was a great way to make music 'if you weren't the world's greatest musician' and that's where their importance lies- they had ideas, ambitions and creativity and via tape machines, DIY synths and electronics and video they paved a way for non- musicians to make great music. By the time they signed to Virgin and then EMI in the 80s they were surfing the wave of what would become dance music/ acid house.

I've posted the 12" single they released on Factory in 1982 previously on three or four occasions. Yashar (plus the John Robie remix on the B-side) is one of the crucial early Factory releases. I can't imagine my record collection without it.

Sensoria from 1984 is industrial dance music, crunching drum machines and a full sound, melodic synth lines, ascending chords, a guitar part, vocals laid on top, brief snatches of backing vox and a sampled voice- all the sort of thing that would be commonplace by 1990.

As well as the Cabs Richard made music under a bewildering number of aliases- some sublime dub techno as Sandoz not to mention Al Jabr, King Of Kings, The Revolutionary Army Of The Infant Jesus, Wicky Wacky, Future Cop Movies and numerous others. In 1989 Richard was ahead of the game again, fired up by house and the new sounds of the underground, he formed Sweet Exorcist with Richard Barrett and put out Testone on Warp. Minimal, tough bleep techno from the steel city. Futuristic music with few obvious forebears- it still sounds like the future.

What's going on? After Lee Perry last week, now Richard Kirk. Are they short of ideas in sound heaven? When I first heard Cabaret Voltaire I knew that I was going wrong in the best possible way. The Cabs and Richard were the ultimate sound terrorists, for me, every one of their Rough Trade output is a pure gem. And of course, as you say Adam, Richard had an innovative and diverse output running through house, bleep and digidub. Richard H Kirk, a real unsung hero. For me he is up there with Hannett and Sherwood, top drawer visionary futurist. RIP
-SRC