They've Been Trying To Tell You 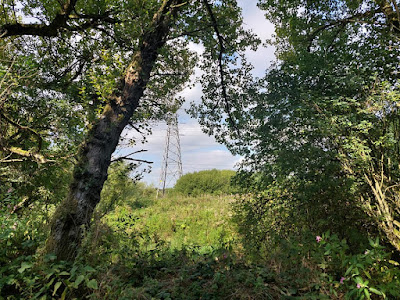 Out of nowhere, after a run of albums which were always pretty good if a little tame, Saint Etienne have released what's sounding like one of the year's best lps- and listened to on vinyl it sounds like a proper lp, from the beautiful sleeve inwards to the eight songs that merge into each other, sequenced as a whole and difficult not to turn over when side one finishes. The three members- Bob, Pete and Sarah- recorded their parts separately, working individually at home, but it doesn't sound like a record made in isolation, it sounds coherent and organic and the result of people bouncing off each other. Many of the songs deal with memory, or more accurately maybe popular memories and false memories, nostalgia and the recent past. The samples contained within the grooves are all taken from the years 1997- 2001 (a Natalie Imbruglia vocal, some Samantha Mumba, a Lightning Seeds part) and the manipulation of them adds to the idea, that memory can be unreliable. That period, 1997- 2001, is sometimes painted as a golden few years, the gap between New Labour's election after a lengthy period of increasingly unpopular and out of touch Tory rule and the attacks on the Twin Towers. The optimism of the May '97 faded quickly for many and looked back at now the optimism about Blair looks really naive. What Bob and co seem to be saying, to these ears, is that any rose tinted look at those few years is an unreliable view of the past. It may have seemed like the sun was always shining but the state of the world in 2021 is partly the product of what happened then. The collapse of the Afghan government hadn't happened when the album was made but is very much a consequence of decisions made in 2001. The recent past for millennials is the same as the 60s was for us- a romanticised place that looks good in pictures but for people living through it had the same problems, worries and horrors as any other time. Not that you need any of this conceptual stuff to enjoy the album, which stands on its own two feet easily, but it adds layers to it which make it a deeper listen.

Penlop is astonishingly good- a wash of sound effects, a bass pulse and then drum sample before those chords hit you in the tear ducts. When Sarah starts singing its almost too much. A slow burning, dreamlike state/song that builds and swells, that sticks with me long after it's ended. The video, by Alasdair McLellan, is a stunner too.

I've Been Trying To Tell You is very much an album of atmospherics, a hugely affecting, melancholic, semi- ambient haze. It's very much an autumnal record to me, the end of summer and the turning of the days into nights (in contrast to their early albums which always sounded like spring to me). Some people and reviewers have been less complimentary, less blown away by it, but it's hitting me very hard at the moment and I can't see me getting bored with it any time soon. It's also nice to be surprised and to have your expectations changed- I really wouldn't have expected such a record from Saint Etienne at this stage in proceedings and full marks to them for reaching deep into themselves to create it.

I really wasn't sure after my first full listen, it wasn't what I was expecting. After a few more listens, I love it,I think it achieves the sense of past and memory ending up a mixed version inside our heads.

I still cannot get into this album. You, and others, love it and that's what has kept me giving it a go, but I'm struggling. Penlop is the highlight for me, but nothing else seems to be sticking.

I can understand TheRobster because you have to find a connection to this record. It is not dominated by songs and more to sound and mood. I love this album because it is the right album at the right time for me and I can get lost into it. As you said - an unexpected highlight this year so far.

I'm absolutely loving this record. I agree you have to find a bit of a connection to it, as it isn't quite what you'd expect from a St Et album, but once you do, it's highly rewarding

It's truly a wonderful album; and Penlop is no exception - 'Baker Man', anyone?

I heard about this from great reviews, and hadn’t really listened to the last few albums much. I typed St Etienne into Spotify and listened to the latest album several times, liking it a lot. Talked about it with a mate and realised I was listening to some French guy. I really recommend it if you fancy a change. The albums called Vavoom.