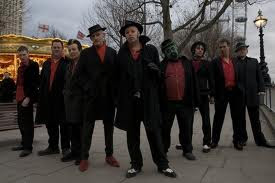 The Urban Voodoo Machine are a 'collective of shadowy ne'er do wells', who make boozy, swaggering, gypsy stomps, using guitars, accordian, tuba, mandolin, empty wine bottles and other instruments which suggest the twenty first century is but a rumour. Live there's often also a half naked woman who plays the gong. This song was on their debut album from 2009- Bourbon Soaked Gypsy Blues Bop 'n' Stroll- and has bags of menace, oozes swagger, and is really rather good.
Orphan's Lament
Posted by Swiss Adam at 08:59