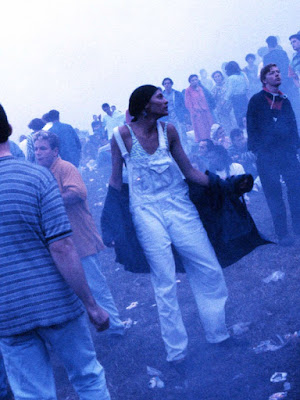 Trance Europe Express was a double cd or quadruple vinyl compilation of early 90s dance music that came with a 192 page booklet (or it was a 192 page booklet about early 90s dance music that came with a double cd). It was an offshoot of the Volume series of compilations which had a broader focus musically. Both series were excellent, high quality songs, often unreleased or different mixes/versions. Trance Europe Express wasn't really trancey at all, more progressive house, ambient and techno. But none of them made sense in the title- Techno Europe Express?

I think I've expressed this view before but it struck me again- at the time we took this music for granted, imagining it would always be this good, that the innovation and leaps forward taking place here would be sustained (for most of the artists the culmination of several years work, of getting the best out of new technology, of watching what was happening on the dancefloor in clubs and at raves). Across disc 1 there are easily 5 or 6 tracks that are as good as anything else released at that time in that area- Orbital's Semi-Detached, Spooky and Billie Ray Martin's Persuasion, Celestial Symphony by Scubadevils (a David Holmes project), a jaw dropping track by Xeper (The Black Dog) and Midnight In Europe by 030. Outstanding work from everyone involved but the one from disc 1 that has turned my head the most is this one from Bandulu.

A different version from the one on their Guidance album (released on Creation offshoot Infonet). Oscillating synths. Clattering rhythms. Abstract but with a sense of forward motion. Mind popping stuff.

Here is their remix of The Times' cover of Blue Monday, something I've posted before but which is ripe for a re-post. A remix that makes me feel like I'm gliding around underwater through bubbles and bliss.

I remember the Trance Europe Express comp very well, I played it often in the shop around that time. Just Googled the sleeve - blimey, it feels like five minutes ago. I also owned a couple of Bandulu albums back then, Guidance and Cornerstone, but haven't heard either of them for many-a-year.

We were all mesmerized by Jeff Mills getting through a new record every 30 mins.

** Techno/Warehouse parties in the early/mid nights. Always on a bank holiday Sunday, remember this one being in a warehouse in Old Street along time before it was gentrified

I'm going to dig Guidance out and see how it sounds.

A bargain when it came out, four pieces of Vinyl, however pressed on sub standard vinyl. Love most of it, especially Follow The Sun. the Spooky and BRM version of Persuasion is a very uncomfortable listen.

Just had Follow the Sun on. Forgotten how good it was/is.
Swiss Adam

There was also Trance Atlantic for US tracks.

I don't remember that at all Ctel. Here it is...

"I think I've expressed this view before but it struck me again- at the time we took this music for granted, imagining it would always be this good, that the innovation and leaps forward taking place here would be sustained"

I think its fair to say that your words could equally apply to any genre of music. I always feel things start out well, then they go up a notch as folk come in and improve on the pioneers and then the mere copycats ruin things.

I'm listening to this today... and remembering the early days of raving in Detroit... this is very special and nostalgic... I'm so grateful to have lived through this amazing time of revolutionary electronic music. Thanks Obama! Lol