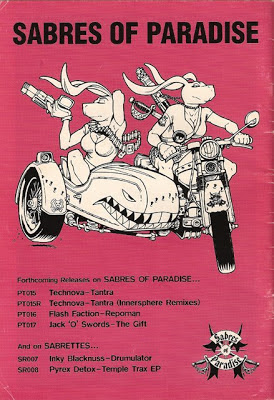 I found this Sabres Of Paradise advert for forthcoming releases on Weatherall's record label back in 1994 so it seemed to make sense to post a track they were promoting. I did Jack 'O' Swords cover of The Gift fairly recently so instead we'll have some very 1994 techno with a remix of Technova (David Harrow) from Innersphere (David Hedger). This track has withstood time pretty well I think - some early 90s techno can be a bit much now, a bit too bangin'- but this is still listenable and enjoyable.

Bastard Bunny began life in his own Dave Anderson drawn and written comic before becoming co-opted by Weatherall's label and Sabresonic night (underneath some railway arches near London Bridge station. I never went alas). Later on Bastard Bunny turned up in Deadline and then NME.

There aren't all that many years between us SA, but I didn't get any of the cultural reference points in today's piece! That's most likely a good thing.......

That's a good point JC. Different scenes were a good thing I think as opposed to the homogenised mush thats become the norm.