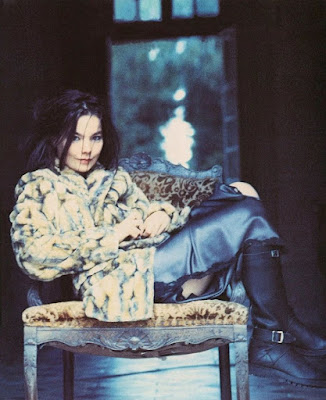 Bjork in 1993 was a joy, making records that were fully influenced by club culture, records filled with rhythm and joie de vivre that also sounded great. She was a joy to look at too. Her songs were remixed to great effect by the best people of the day- I've posted the Sabres Of Paradise mixes of One Day before, Black Dog warped her and the Fluke versions of Big Time Sensuality are the definite versions for me. There are two more here, one from 808 State's Graham Massey, a man in large part responsible for Bjork's dancefloor experiences in and around Manchester in the early 90s, and one from Justin Robertson, resident of an M postcode at the time.

I too miss clubland Bjork. Question: which is the best Fluke version of Big Time Sensuality? The longest one? Thanks

The Magimix I think Tom but they're all spot on.

it took me a long time to forgive Fluke for not being the next Underworld, something which was important to me at the time. But this is the season of forgiveness so I shall listen to those mixes, and the Justin version. A merry Christmas to one and all!