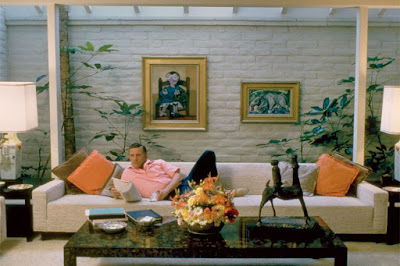 This bit between Christmas and New Year is actually the best bit of the festive season, not quite sure exactly what day it is or what you're supposed to be doing. Into this blur of overdoing it and the general fug that surrounds us I'm going to chuck these random pieces of pop culture. The picture above shows Kirk Douglas, a Christmas film kind of bloke if ever there was one (The Vikings, Paths Of Glory, Spartacus) relaxing in his mid-century modern style home. Kirk recently turned 102 years old.

One of the best presents I got this Christmas was Beastie Boys Book, a book by the two surviving Beastie Boys and their associates that is no ordinary rock autobiography and all the better for it. In one chapter Ad Rock describes his Toyota Corolla and the mixtape that sound-tracked that period of his life in the early 90s. Ad Rock says that The Humpty Dance by Digital Underground is the greatest record since the invention of recorded sound (or something similar) and let's be fair, it is a classic golden age of hip-hop, crossover dance hit. Based around a Sly and The Family Stone drum sample rapper Humpty Hump (rapper Shock G's alter ego) brags about his amazing sexual prowess, attained despite his comical appearance, the boring uniformity of other rappers and the Humpty Dance, a loose, anything goes, just-get-down-and-do-it kind of dance as opposed to the drill formation dancing of MC Hammer. Sure, there may be aspects of the song that are a little dated but we could all do with a little bit of doing the humpty hump...

Two apologies- I don't have an mp3 of The Humpty Dance at the moment so it's video only and also the video is TV friendly so bleeps out the profanities.

Tim Burgess is a good Twitter follow and always seems like a really nice bloke. He recently tweeted this clip, The Charlatans in October 1990 at an amphitheatre somewhere on the West Coast of the USA playing their debut single Indian Rope- loose limbed, organ led garage shuffle. There's a really nice breakdown section in this live version...

Indian Rope is a fine song, a sign that from the start this group were not bandwagoneers at all and had a winning way with a tune.

Lastly, for no reason other than it needed to go somewhere and this post is as good a palce as any, here is Robert Palmer, live at San Diego State University in 1987, the man from Addicted To Love and Some Guys Have All The Luck, covering Husker Du's New day Rising, the righteous blast of hardcore punk that opened the album of the same name.

Have a moment to let that sink in. And here's Bob, Grant and Greg cleaning your ears out back in 1985.

also got the Beastie Boys book.....it's taking me ages to read it as I keep finding something on each page or in a photo that I want to go and check out. It's a superb read.