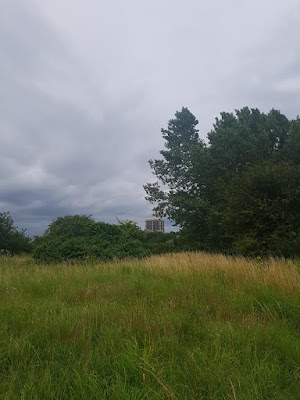 I found this video clip a few days ago, Durutti Column playing in Manchester Cathedral in 1985. The song is Bordeaux Sequence, a beautiful Vini Reilly song, one of his best and the performance as you'll see is stunning. The footage, filmed onto video tape, is astonishing too, the close ups of parts of the cathedral, it's stained glass and statues, and the expanded mid- 80s Durutti Column, a stick thin Vini in white shirt playing guitar, viola player John Metcalfe (whose contribution is immense), vocals by Vini's then partner Pol and the ever wonderful Bruce Mitchell on drums. Words can't really do justice to the clip- one of my friends on social media said that 'parts of (the video) had me holding my breath' and I know exactly what he means. He also said that the film clip looks like it could have been made decades ago or yesterday which is also true.

The song started life on 1983's Another Setting album, recorded at Strawberry Studios in Stockport, with Vini singing in his fragile, whispery voice and sparse drums from Bruce. By 1985 it had been fleshed out as seen above, with viola, keys and Pol singing instead of Vini. When he came to re- record the song it was with Stephen Street in the producer's chair and the album was 1987's The Guitar And Other Machines (the other machines of the title were samplers, sequencers and drum machines), renamed as Bordeaux Sequence. In 1988 Durutti Column played at the WOMAD festival in St Austell, Cornwall. Former ACR and Swing Out Sister's Andy Connell played keyboards but they performed without Pol. Vini sings the song instead. It's another breathtaking live take on the song (originally released on a four song single in 1989).

The picture is Stretford not Bordeaux or St Austell, less romantic but closer to home.
Posted by Swiss Adam at 08:00

Lovely bit of film, with great visuals from what looks like a beautiful setting.
Really like how that generation of Manchester musicians all seemed to help each other out so much. I think ACR and their compradres still seem to do this. Maybe it comes from that much discussed Musician's Collective.

Thanks for your continued DC posts. After originally really liking their tracks on the Factory Sampler, Fac 2. I was so disappointed by the direction that they took. I foolishly disregarded them for nearly 40 years. The nuance and subtlety of Vini & Bruce's playing is finally getting through to me. In these pandemic times their playing underlines the fragility of life and the care that we must take with each other. Lotta Continua.
-SRC

Got to say SRC, that kind of comment makes the daily blogging worthwhile.

You create really interesting snapshots of music, past and present, with your daily posts. The Dururtti's took my interest when you posted a live performance awhile back, from scandinavia i think. I was amazed by Bruce's drumming style and skill. I'm looking back through their large discography. There are so many gems, as you have often pointed out. Today i'm liking an electronic piece 'Dance 1'. cheers.
-SRC

Yes, that live performance is a really good one, Finland in 1981. Bruce's drumming is brilliant ans complements Vini perfectly. As you said above, its all nuance and subtlety.