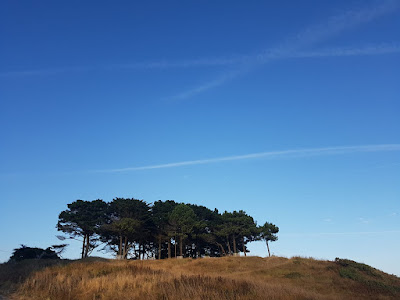 We're back. A day's drive from southern Brittany yesterday with a three hour pause while the ferry captain took over saw us get through the door at just before midnight. The coastline and beaches with their clusters of pine trees and beautiful, golden-to-deep-blue dusks seem a long way away now. The Atlantic coast near Royan is wonderful, packed full of coves and beaches and forests, lots of places to stop and wile away the hours. South Brittany, particularly round the estuary of the river Odet and the town of Benodet is also a lovely place with miles of rocky coastline, some sandy beaches, the undulating Breton countryside and cheap wine and food.

While we were gone Britain seems to have been overtaken by a right wing coup, led by an English, No Deal fanatic and his cronies. Keeping in touch at a distance was pretty depressing and after a few days I tried to ignore political events in the UK as far as possible. Meanwhile a dam not too far from here threatened to collapse and destroy the town of Whaley Bridge. Local roads here were flooded, the Mersey was at an all time high, routes to the airport were closed.

Here's a new hit of summer psych- disco from Moon Duo, Ripley's guitar falling in sun dappled waves and droplets over the beat with some very laid back twin vocals. The album is out at the end of September but the songs released so far seem perfect for August.

Heard this on KEXP earlier this week. This album is going to be a biggie.