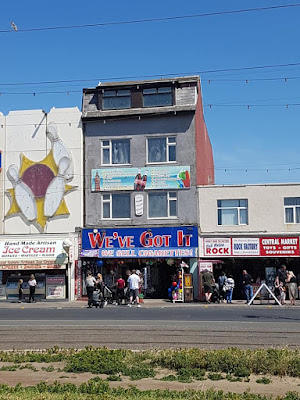 The new album from Jane Weaver is turning out to be the unexpected treat of the summer so far. Loops In The Secret Society is a twenty two track reworking of songs from her previous two lps, The Silver Globe and Modern Kosmology. The songs have been stripped back, the lusher instrumentation replaced by clicks and whirrs and drones, Jane's folky vocals more distant and spooked, motorik drum loops and mechanical rhythms, everything put through a grainy, radiophonic filter. They've been joined by some new ambient tracks and more drones. Taken as a whole it could be the soundtrack to a lost  British 1970s horror/sci fi TV series, people wandering off the path, David McCallum appearing out of the mist, unexplained events, wicker men, that sort of thing. It's an album in its own right, new textures and tones from the older source material and it sounds close to perfect right now.

This re-imagined take on 2017's single Slow Motion is as good a taster as any but really you need to hear the whole thing.

For some reason I haven't got around to this one yet, thanks for the reminder.

it's a great album.